Yan Yu Lin and her seven-year-old daughter live in a tight studio in San Francisco’s Chinatown, in a century-old building where 60 or so residents on each floor share a bathroom.

Along the back wall of the room is a plastic potty – the kind designed for toilet training toddlers. The shared bathrooms are out of order so often, so rank and unhygienic, that Lin has her daughter use the plastic potty instead. “It’s safer,” she said.

This Dickensian-sounding living situation is more common in the US than most would think.

Almost half a million American households lack basic indoor plumbing, with renters and people of color in some of the country’s wealthiest and fastest growing cities most likely to be living without running water or flushing toilets, new research reveals.

While some rural and indigenous communities have never had indoor plumbing, the vast majority of unplumbed Americans are in fact found in urban areas, with one in three affected households living in just 15 cities, according to research by the Plumbing Poverty Project (PPP), a collaboration between King’s College London (KCL) and the University of Arizona.

Two side-by-side slope graphs, one showing cities where piped water access is worsening, the other improving. In the worsening graph, San Francisco, Portland, Phoenix and Seattle are labelled. In the improving graph, New York, Los Angeles, Houston and Cleveland are labelled.

The full analysis, based on data from annual community surveys by the US Census Bureau, is published today in collaboration with the Guardian as part of our long-running series exposing America’s water crisis.

In San Francisco, which according to Wealth-X has more billionaires than any global city other than New York and Hong Kong, almost 15,000 families live in homes without proper plumbing. Median house prices have tripled since 2000 while the number of families in substandard housing with incomplete plumbing increased by 12%.

Plumbing poverty, like all hardships in the US, is racialized: as of 2017, Black people made up 9% of San Francisco’s population but accounted for 17% of households without indoor plumbing.

“The story of plumbing poverty in San Francisco is inextricably tied to unaffordable housing, declining incomes, post-recession transformations in the California rental sector, and racialized wealth gaps, fueled by a kind of ‘anti-Black urbanism’ that has either driven Black San Franciscans into more precarious housing conditions or out of the Bay entirely,” said Katie Meehan, lead researcher of the PPP and professor of environment and society at KCL.

The problem is nationwide.

Even though plumbing poverty appears to have declined in several major cities including New York, Los Angeles and Chicago over the past two decades, tens of thousands of residents continue to rely on public restrooms, school showers and chamber pots. 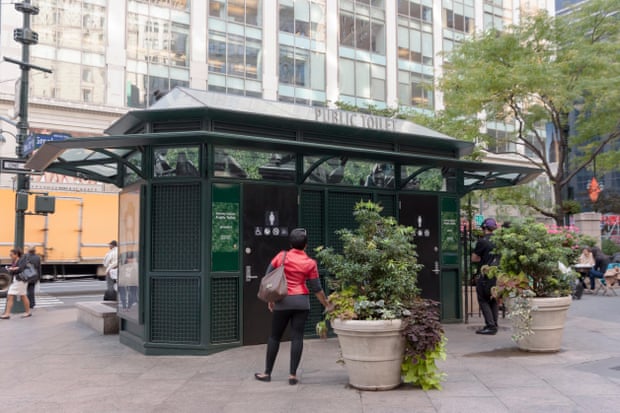 In 2017, after a period of sustained economic growth following the Great Recession, at least 28,000 households in New York and 19,000 in LA still lacked basic indoor plumbing. And the progress made could actually be inflated due to the Census Bureau eliminating one of the three survey plumbing questions in 2015.

Meanwhile other cities including Milwaukee, San Antonio, Phoenix, Nashville, Seattle and Cleveland made little or no progress in tackling plumbing poverty between 2000 and 2017. The stagnation reflects a combination of factors including the legacy of historic racist housing policies, decades of underinvestment in water and sanitation infrastructure, and widening income inequalities since the Great Recession.

Table showing “Estimated households without piped water” and “Pct of population” for the top 50 metro areas in the US.

In Phoenix, one of the fastest growing sunbelt cities in the south-west, renters are earning less and paying more to live in homes without running water compared to two decades ago. In 2017, unplumbed renters on average spent 43% of their monthly income on rent compared to 25% in 2000.

“It’s not only that the gap between the water-rich and the water-poor is widening in America, it’s also that it’s driven by a housing sector that lacks any safety net for working families, especially households of color, that cannot afford the astronomical prices of San Francisco, Seattle, or now even Portland,” added Meehan.

The PPP white paper, which focuses on the 15 worst cities, is intended as blueprint for lawmakers to tackle gaps in research and infrastructure funding to end plumbing poverty – which is essential if every American household is to one day have access to affordable water and sanitation.

Clean, safe, affordable water and sanitation are essential for human health, economic prosperity and environmental justice. Yet when Covid struck and public health experts recommended regular hand washing to curtail the spread, an estimated quarter of the world’s population, 2 billion people, lacked clean running water, while almost half did not have access to proper sanitation, according to UN figures.

While the vast majority live in developing countries, at least 1.1 million people in the US, ostensibly the richest country in the world, also suffer the indignity of living in homes without running water, an indoor shower or bath, or flush toilet – because of incomplete plumbing. An additional 16 million people or so lose access every year when disconnected due to unaffordable, unpaid water bills.

‘There was nowhere for me to go’

Before the pandemic, when schools were open for in person classes, Lin’s daughter knew to use the toilets before coming home. After schools, businesses and even park amenities closed down, and families without plumbing like Lin’s were increasingly forced to rely on bottled water, wipes, potties and commodes.

Lin recalled one occasion last year when she fell ill with an upset stomach and the bathroom on her floor was out of order. She rushed down one floor, but the bathroom was occupied, as was the one on the next floor. “You can imagine how embarrassing that was,” she said. “I was ashamed. And I couldn’t even clean myself up afterwards – there was nowhere for me to go.”

Her landlord usually patches up the problem within a day or two, by pumping out the drains or tightening leaky faucets, but the ancient plumbing keeps giving out, week after week.

The situation is difficult for her to talk about. When she moved to San Francisco from China, Lin never imagined living like this. “When I speak to my dad back home, I try not to give him too many details about my life here,” she said. “I don’t want to make him upset.” 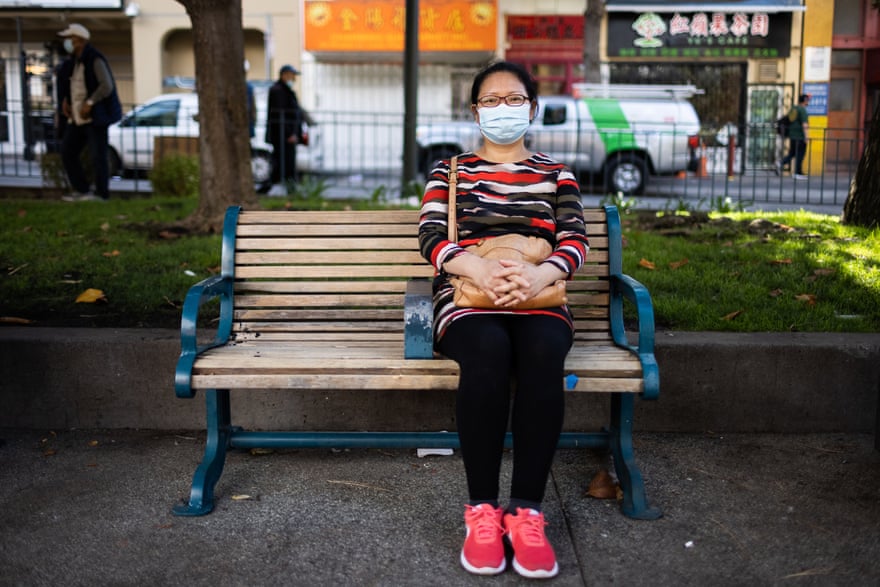 She is not alone. Renters make up fewer than half of households in the San Francisco metro area, but account for almost 90% of its plumbing poverty.

Yet often, those without plumbing spend more on rent than those with running water and flush toilets. In 2017 the average unplumbed renter in San Francisco spent 44% of their monthly income to live in a home without piped running water, while the typical city resident spent 32% on a home with full plumbing.

In other words, renters with incomplete plumbing are a growing subclass in one of the richest and so-called progressive US cities, according to the PPP analysis.

The new data reinforces earlier findings, including a 2019 report by the non-profit Pacific Institute that estimated 140,000 people in California had incomplete plumbing. The true number is undoubtedly much higher, as excluded from the count were the growing number of Bay Area residents living in mobile homes without water hookups and families who informally rent garage units or sheds.

In cities like San Francisco and New York, the problem is particularly marked in single room occupancy buildings – housing units with shared bathrooms like Lin’s, which are concentrated in neighborhoods mostly populated by poor and working class families of color.

Nationwide, plumbing poverty is usually clustered in small pockets, reflecting historical racist housing and infrastructure policies which have long discriminated against communities of color and tribes.

“It’s a confluence of forces and the underlying causes will depend on where you live, but the social safety net – including infrastructure spending – being hollowed out over the last 40 to 50 years, has impacted people everywhere. The role of race and structural racism is enormous,” said Stephen Gasteyer, associate professor of sociology at Michigan State University who researches water access.

Overall, federal funding for water and wastewater infrastructure has declined steadily since its peak in 1977, making it harder for underserved communities to get financial support to build and maintain systems.

As investment stagnated, new problems converged with old ones. In addition to installing indoor plumbing in homes across the country, millions of lead lines still need to be replaced, meanwhile new contaminants like PFAS and microplastics have emerged as significant health hazards.

“It’s solvable, but we’ve spent decades creating this crisis so getting out of it will take some time, money and creativity to rethink how we do infrastructure so that we can deal with emerging contaminants and deliver affordable water to everyone,” said Gasteyer.

The Bipartisan Plan that passed the Senate included $48.4bn – less than half what Biden proposed – for water programs over five years, including $15bn for lead and $15bn for PFAS, as well as $3.5bn for sanitation projects on indigenous lands.

It’s simply not enough, and means millions of Americans will continue to live without clean, safe affordable water for years to come.

Until recently Rosa Ramiréz and her two daughters lived in a studio apartment without a working bathroom in San Francisco’s Mission District, a historically working class Latino neighborhood that has rapidly gentrified, sending rents sky high. The sink spewed yellow colored water, and the toilet wasn’t properly connected to the building’s plumbing system. Ramiréz’s rent was $2,300 a month. 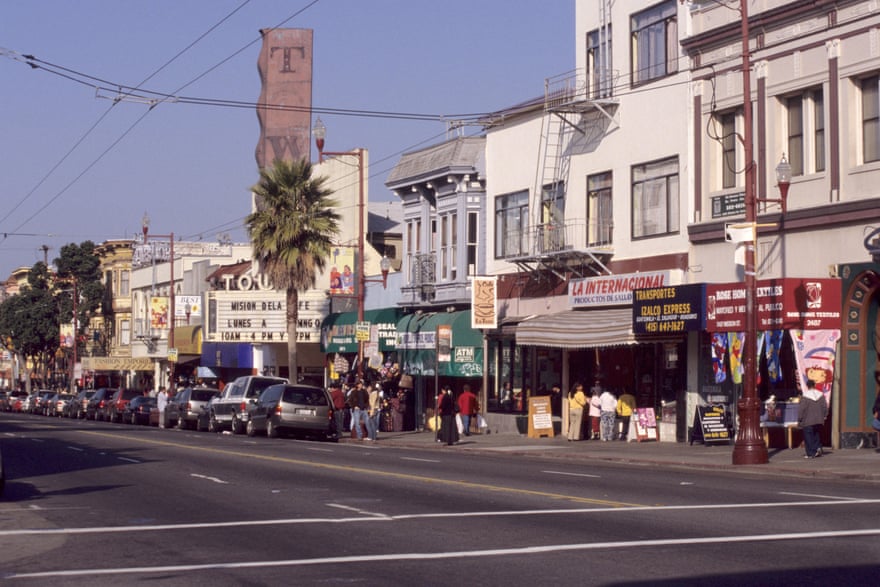 For two years, whenever she and her daughters needed to use the toilet or wash up, they relied on restrooms at the local donut shop, cafe or taqueria.

When the pandemic hit, the situation became untenable. With schools shut down, her daughters aged eight and 15 could no longer use the facilities on campus. “It was unbearable,” said Ramiréz, 49, who works as a cleaner. “The hardest part was when one of us had a stomach ache and none of the restaurants wanted to lend me their restroom.”

The landlord refused to fix the bathroom, and it took months for Ramirez to find another studio as rents have become so unaffordable in the neighborhood. “It has been increasingly difficult to live here,” said Ramiréz. “The conditions now are inhumane.”

This article was amended on 28 September 2021 to attribute Wealth-X as the source of research into global billionaire cities, and to remove a photograph of the Cabrini-Green housing project in Chicago, which was largely demolished by 2011. 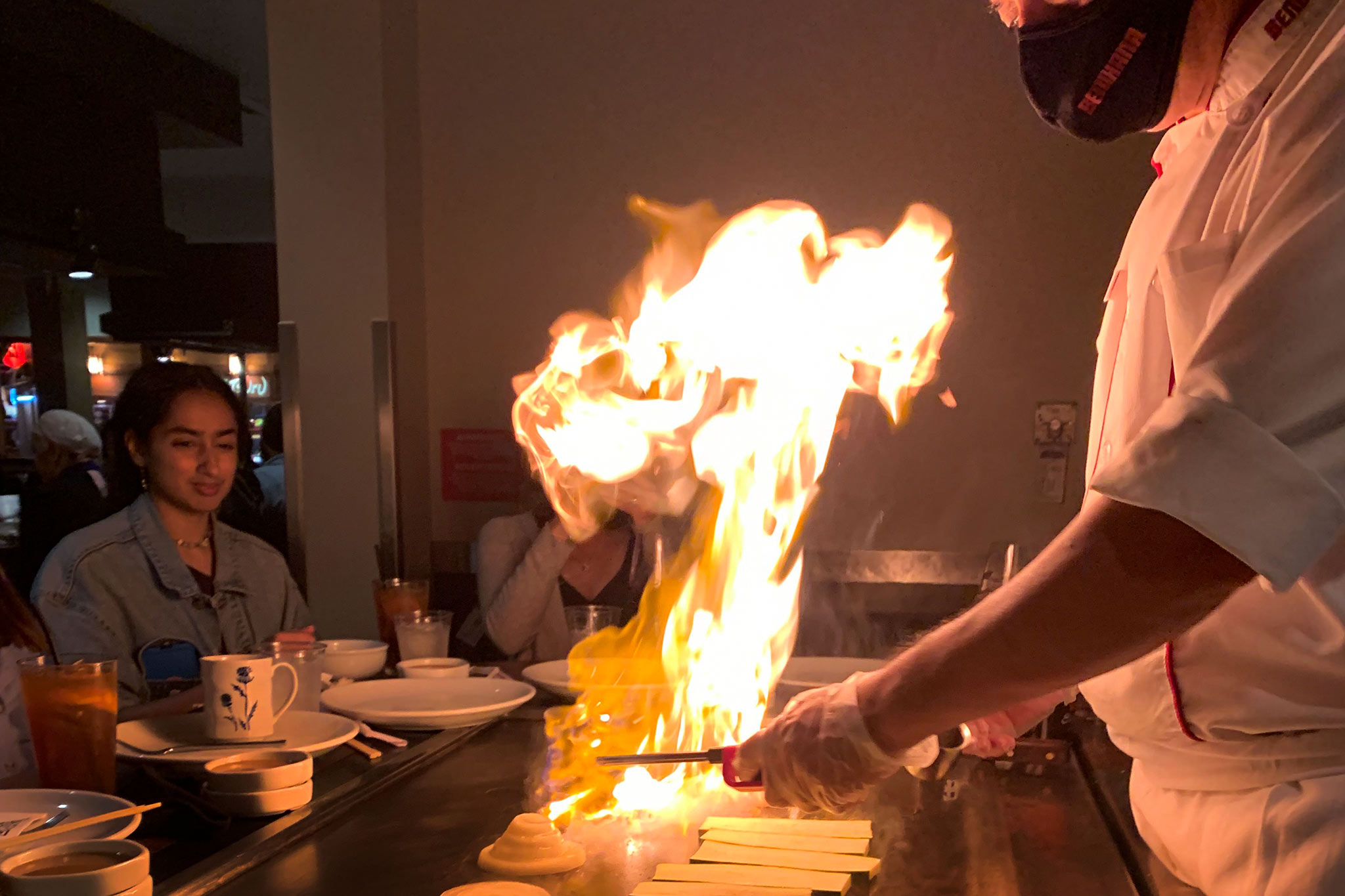 At San Francisco’s solely Benihana, ex-workers are being recalled amid a really actual hiring disaster 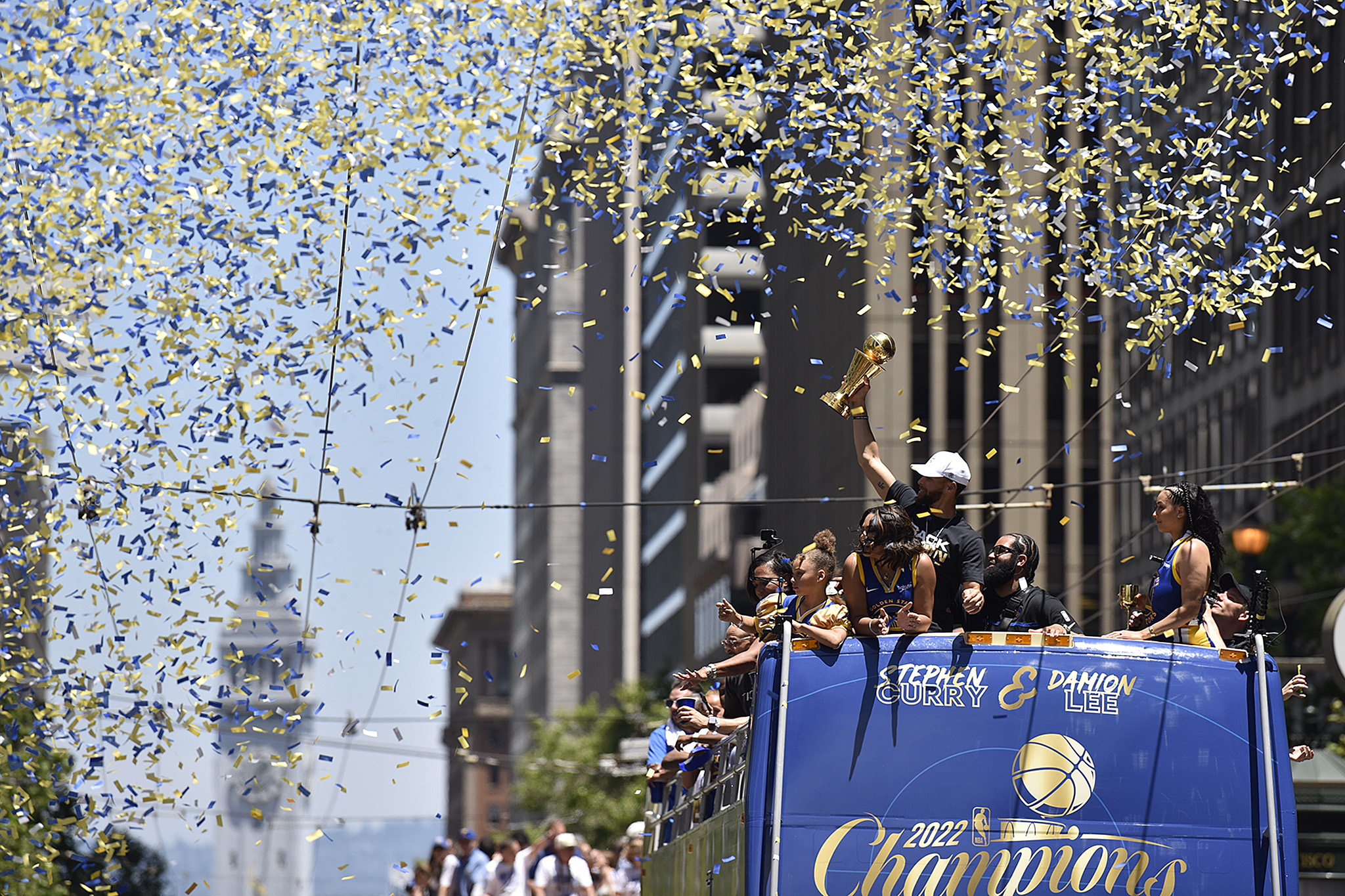