A small storefront on Grant Avenue is bringing a taste of Amsterdam — and ancient Egypt — to San Francisco. Professor Seagull’s Smartshop, which opened in North Beach this April, is a cross between an art gallery, a witchy herb shop and a modern cannabis dispensary (except you can touch the products).

Psychedelic art covers the walls and sleek Scandinavian-inspired shelves hold a tightly curated selection of loosely controlled herbs. But instead of the typical variations of cannabis, the shop is devoted to lesser known psychoactive and psychedelic sacred plants from all over the world.

While the first of its kind in San Francisco — and according to the owners, the entire country — “smart shops” are ubiquitous in Europe, especially Amsterdam, and refer to stores that sell herbal remedies, hangover cures, botanical samples and “nootropics,” or brain-enhancing substances. Although there are other stores selling herbal supplements such as kratom, owner Benjamin Manton says his store is different since the focus is solely on the use of plants and products with psychoactive properties.

The chalkboard sign in the shop window advertises items such as San Pedro and Peruvian torch cacti, which you might be familiar with if you’ve ever embarked on a vision quest in the desert. But the first product to catch my eye is a bag of brilliant blue and yellow petals, which I’d soon try myself, in addition to experimenting with damiana, wild dagga and Mexican dream herb tea.

The exterior of Professor Seagull?•s Smartshop in San Francisco, Calif. on May 19, 2022. The shop specializes in obscure and legal psychedelics.
Douglas Zimmerman/SFGATE 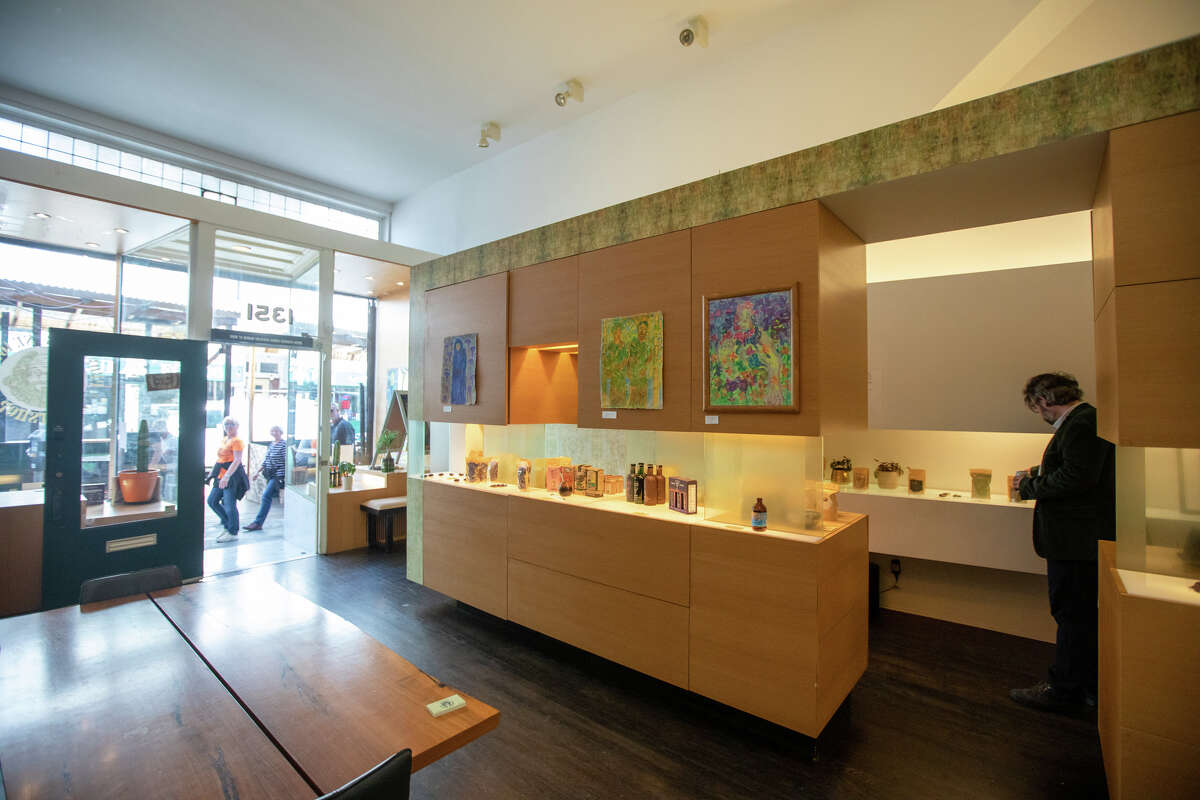 Benjamin Manton is the owner of Professor Seagull?•s Smartshop, works on a display inside his store in San Francisco, Calif. on May 19, 2022. The shop specializes in obscure and legal psychedelics.
Douglas Zimmerman/SFGATE

Manton, who owns the shop with his wife and looks a tad like a younger version of the store’s namesake/logo (if you squint and are on psychedelics), tells me the petals are from an Egyptian blue lotus.

“The ancient Egyptians would steep it in wine and drink it during religious ceremonies and parties,” Manton says. “But you can also make it into a relaxing tea.”

The flower, which some call the sacred blue lily of the Nile, is depicted in countless ancient temples and writings throughout Egypt, Greece and parts of Asia. Its ubiquitous depictions suggest that the lotus helped the ancients connect with the divine through its hallucinatory effects and was an important part of ceremonies around sexuality. Given that it increases circulation, the petals are thought to be powerful aphrodisiacs. It also has reported health and psychological benefits, thanks primarily to the apomorphine compound found in the plant that stimulates the body’s dopamine receptors. Historians believe the ancient Egyptians used the flower as traditional medicine, and in more modern times, its active compounds have been utilized to treat anxiety and even Parkinson’s disease. 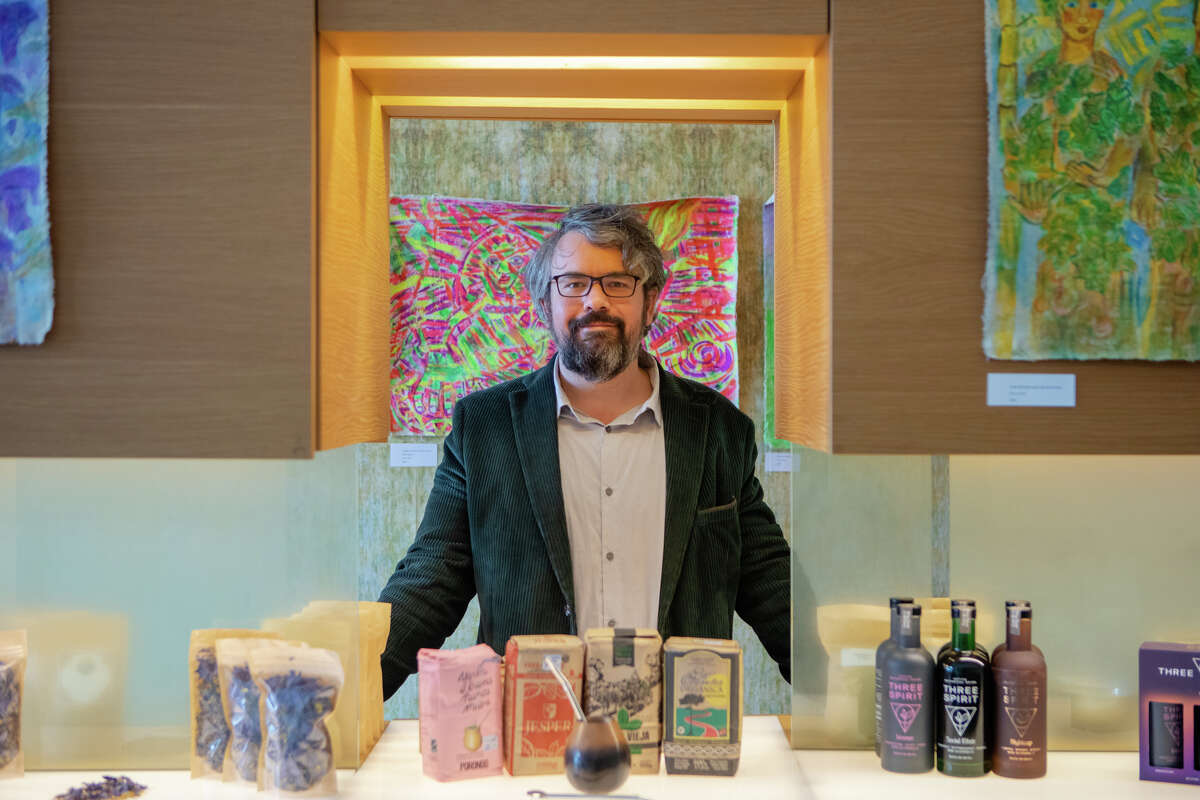 Benjamin Manton is the owner of Professor Seagull’s Smartshop in San Francisco on May 19, 2022. The shop specializes in obscure and legal psychedelics.

Plant medicine for the psychedelic-curious

In the U.S., blue lotus has not received FDA approval, but it’s also not a controlled substance, so it is legal to grow and sell. The same goes for the rest of Professor Seagull’s inventory: Everything is legal in California and most other states — at least in the form it’s displayed and sold in the store and online shop.

The mescaline that can be extracted from San Pedro and Peruvian torch cacti is illegal, but in their cactus form, they’re just attractive house plants. There’s also Mimosa Hostilis root bark, a major ingredient of ayahuasca, which doubles as a popular natural dye for soaps and fabric.

“We are providing these products in the form they are legally allowed to be presented,” Manton tells me over email. “Some items we can talk openly about in terms of historical use and dosage. And some things are sold explicitly for growth as a houseplant or for arts and crafts supply.”

Of course, what you choose to do with your house plants and art supplies is your own business.

“It is our hope that the city or the state will decriminalize psychedelic plants soon so that we can begin to have more open and honest discussions with our clients about the history and potentials of these plants,” Manton writes. 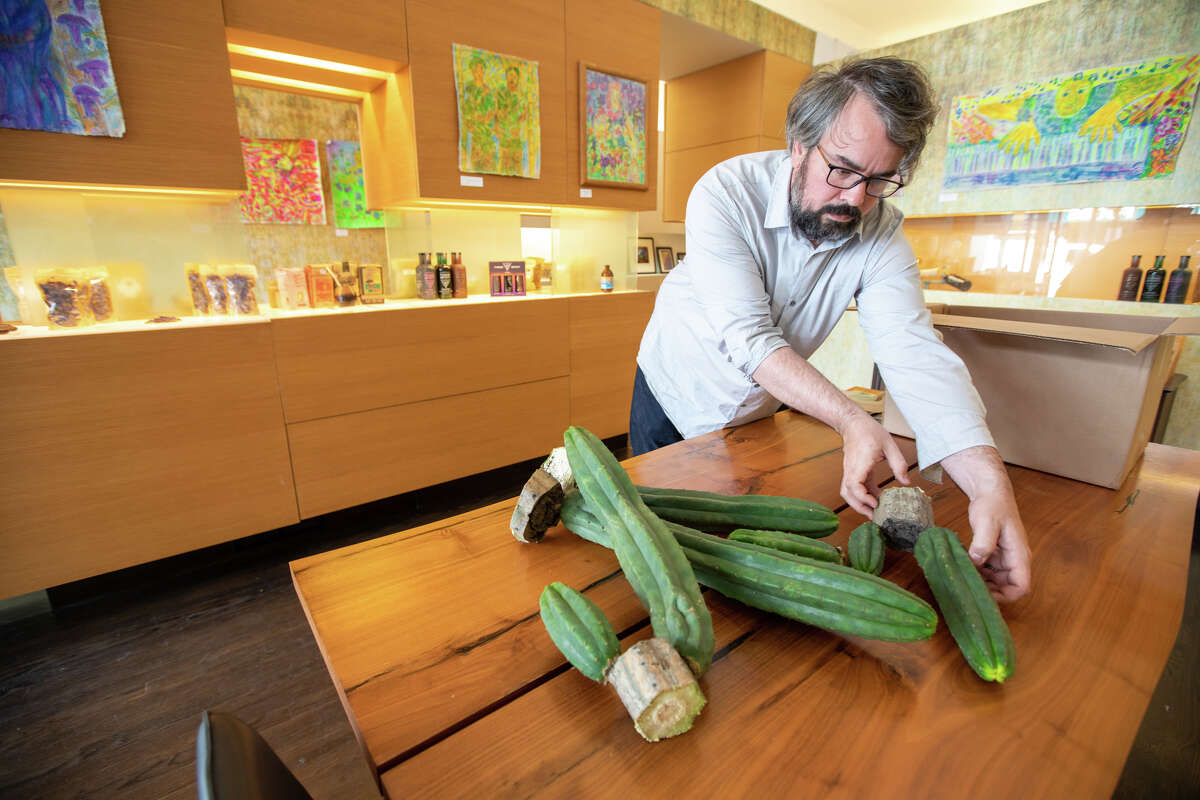 Benjamin Manton, the owner of Professor Seagull’s Smartshop, shows off some recent cuttings of San Pedro cactus in San Francisco on May 19, 2022. The shop specializes in obscure and legal psychedelics.

Manton sees potential in the store to serve as part of the solution to San Francisco’s (and the country’s) mental health and addiction crises.

“In the future we hope to be a place where therapists can send their clients for information and access, and where practitioners can come for local access to sustainably sourced plant medicine.”

For now, the Mantons are focused on providing transformational experience through plant medicine and art, as well as being a resource for harm reduction. In addition to providing safer alternatives to party drugs, such as Kanna, which Manton says is being used in place of cocaine and MDMA, the shop offers test kits from DanceSafe to test recreational drugs for adulterants, such as fentanyl.

Manton gave me a tour of the shop with a matter-of-fact, professorial air that is so knowledgeable and nonjudgmental, and I end up leaving with four bags (and more than 100 grams) of various teas and smokeables that promise to ease anxiety, aid sleep and dream recall and invoke euphoria. At just $40, a similar haul at a cannabis dispensary would cost at least three times that, yet many of the items I purchased boast similar effects and benefits. 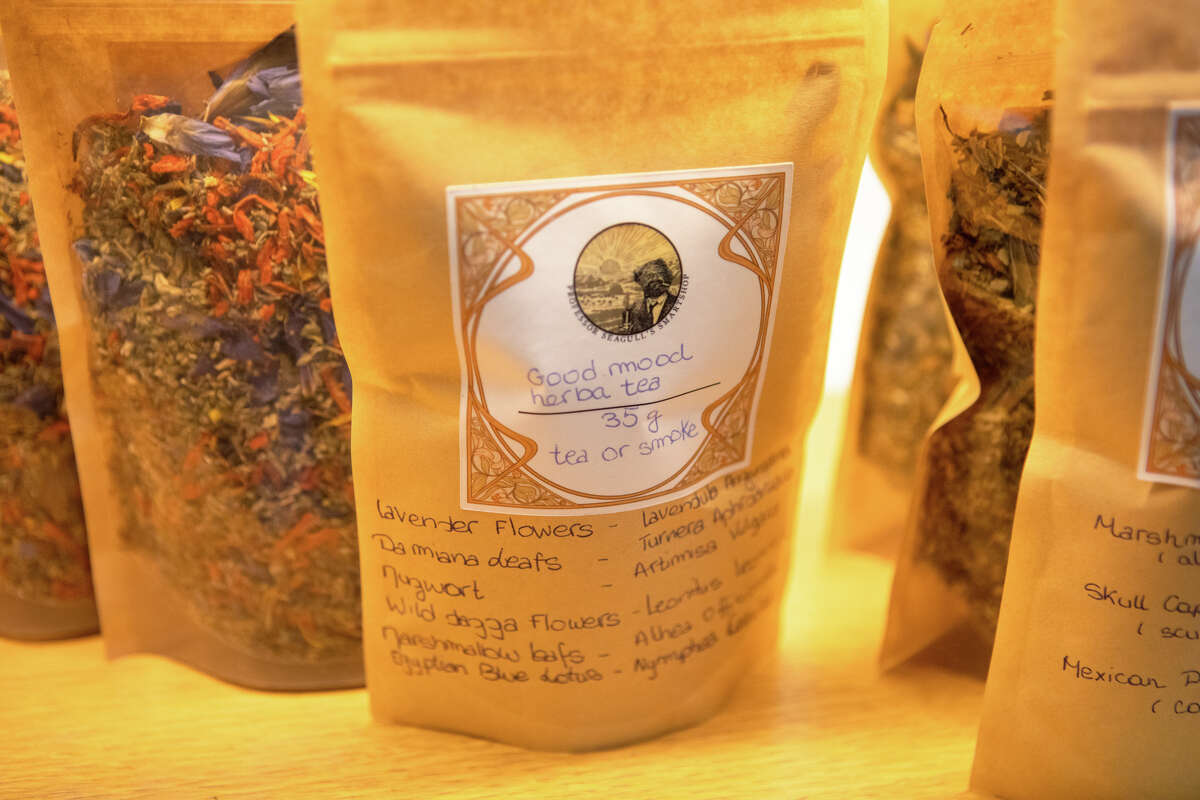 Some of the herbs that can be consumed in a tea or smoked at Professor Seagull?•s Smartshop in San Francisco, Calif. on May 19, 2022. The shop specializes in obscure and legal psychedelics.
Douglas Zimmerman/SFGATE 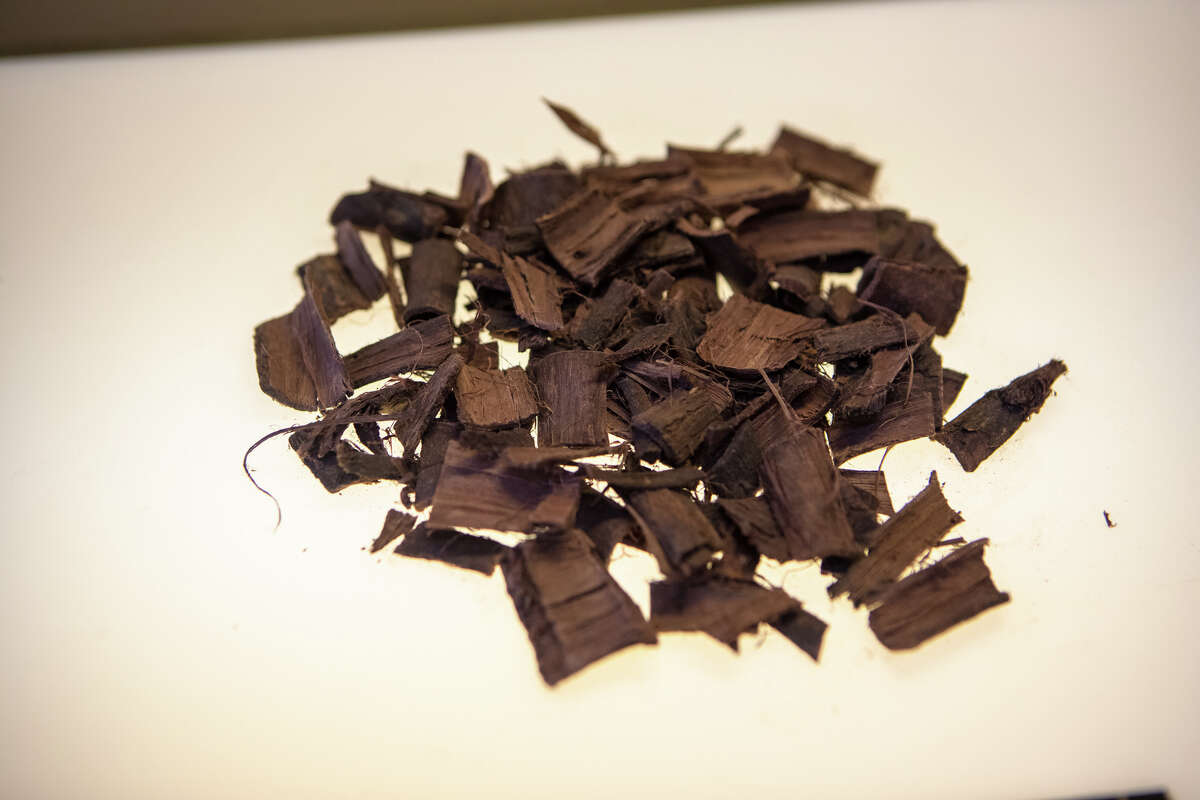 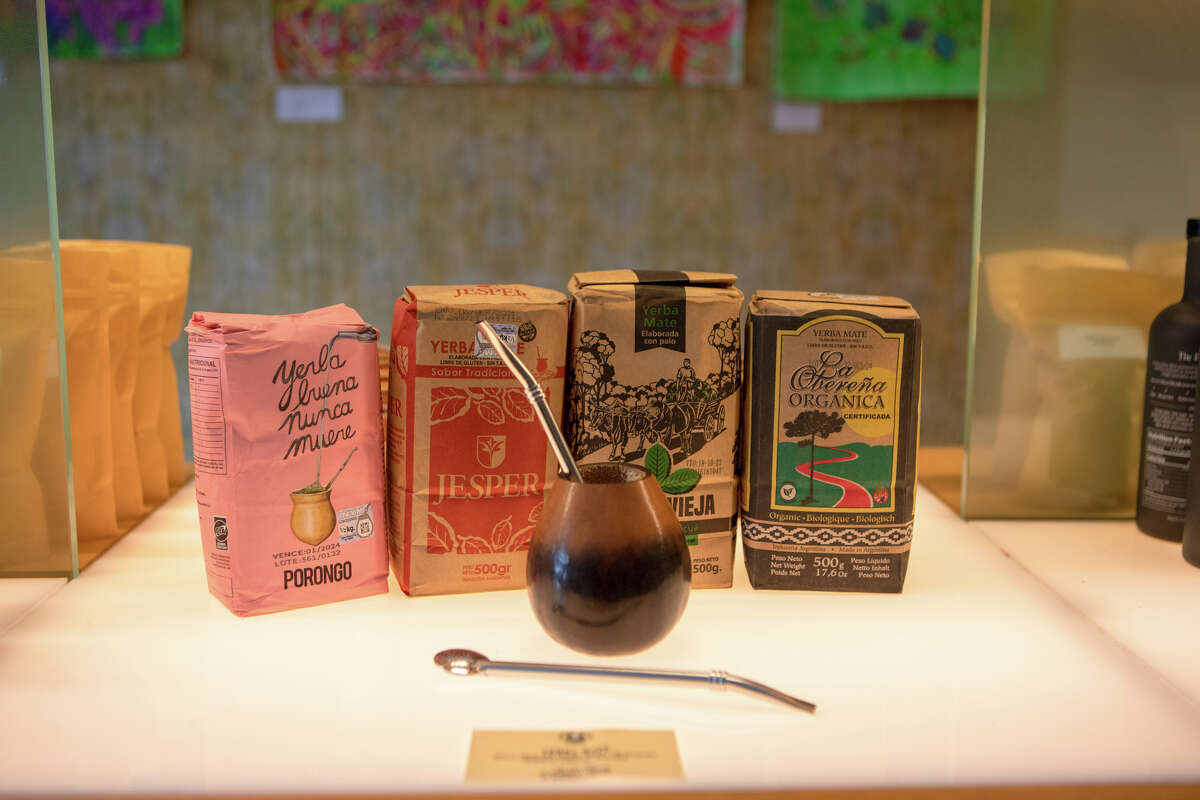 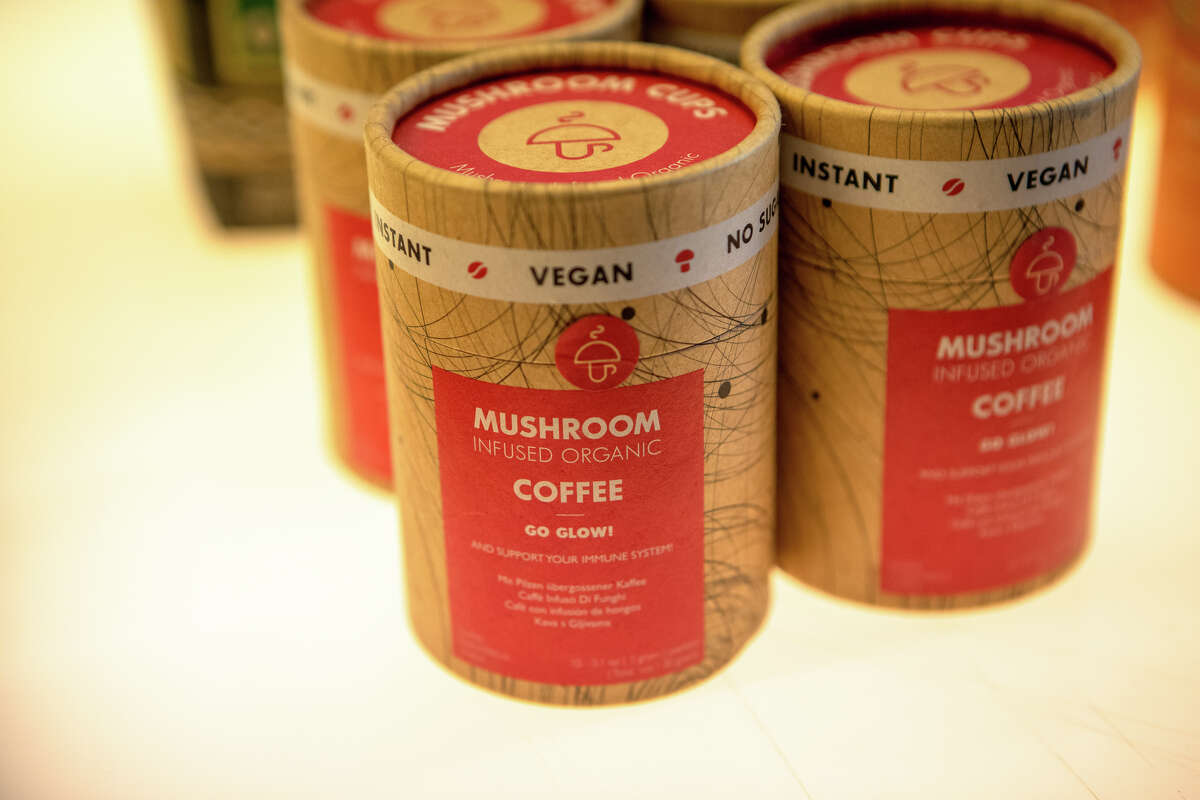 Some mushroom infused coffee available at Professor Seagull?•s Smartshop in San Francisco, Calif. on May 19, 2022. The shop specializes in obscure and legal psychedelics.
Douglas Zimmerman/SFGATE

My week of plant discovery

Back at home, I begin a week of plant- and self-discovery. The first order of business is making blue lotus wine, which just requires adding 15 to 20 grams of petals to a bottle of wine (after you pour a little out or have a glass to make room), setting it in the refrigerator and giving it a shake every day until you’re ready to drink it (anywhere between two days and two weeks). I used half a bottle of grocery store cabernet that I had lying around, but any kind will work. Manton suggests not using anything special, since the lotus will alter the taste.

Then I roll up joints of damiana, which is native to parts of the U.S., Mexico and Central America, and wild dagga, which grows abundantly in southern Africa. Both are said to produce a light, cannabis-like high. Wild dagga can enhance color perception, so tonight I turn to these while I paint instead of my usual sativa.

As I prep the canvas and the light floral-smelling smoke fills the space, I feel a familiar buoyancy, like I’ve taken a baby hit of weed. The taste is reminiscent of black tea and the psychoactive effects are decidedly subtle. It’s really all I need though — just a slight nudge into flow state. It’s nice to avoid some of the side effects of cannabis, such as misplacing the paintbrush I’m holding or randomly obsessing over something embarrassing that happened seven years ago.

Next I light up the wild dagga. The bright orange dried petals don’t grind that well, so it makes for a looser joint. The spicy smoke burns the back of my throat slightly, but I’m too lost in mixing satisfying globs of paint to care much. I’m a little bit more excited by the way the paint drips down the canvas and my strokes seem a bit bolder and more confident. The day’s worries wash off my brush in vibrant swirls.

Then it’s time for a cup of Mexican dream herb tea and bed. The mixture is unpleasantly bitter on the back of my tongue, so I add honey. A few minutes later I feel deeply relaxed, like I’m hovering at the doorway of sleep with none of my usual effort to get there. Soon I easily drift off into a land of chaotic dreams. 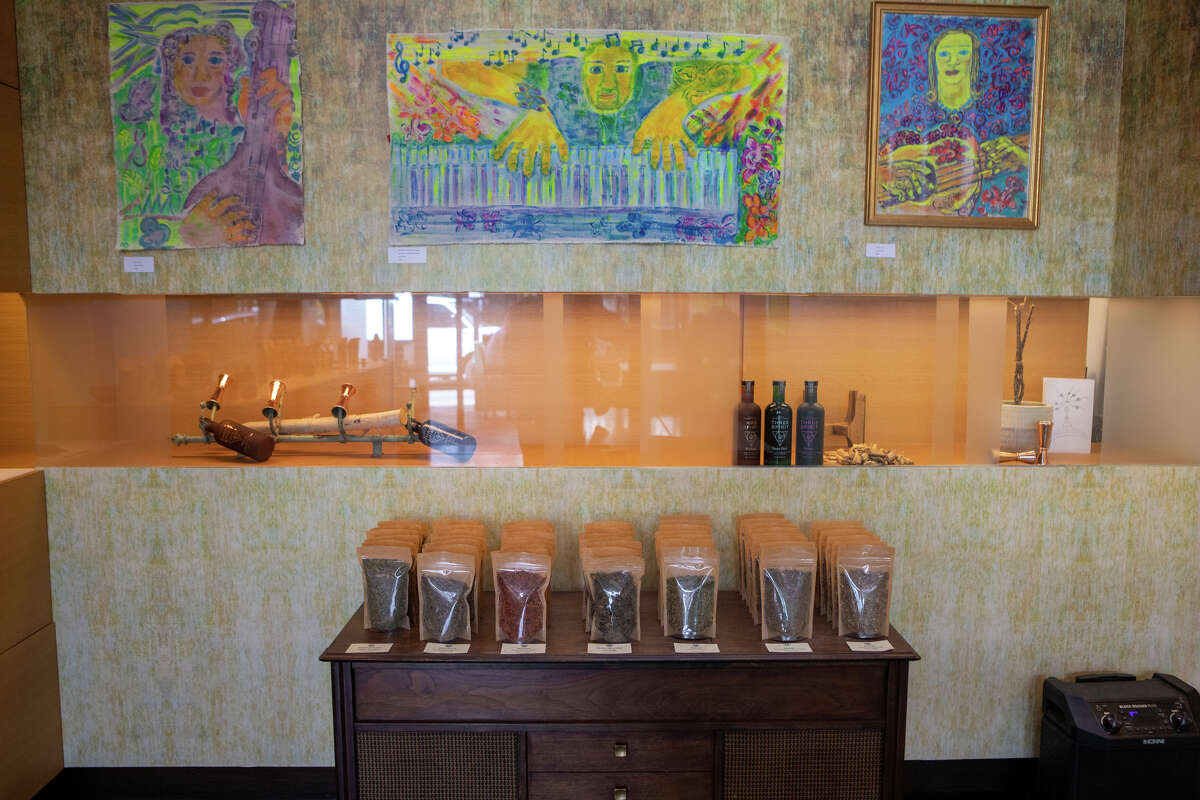 A display shows some of the obscure and legal psychedelics available at Professor Seagull’s Smartshop in San Francisco on May 19, 2022.

I drank the tea before bed a few more nights this week, and each time my sleep was filled with cinematic dreams, some of which took on the quality of “Everything Everywhere All at Once”. Dreaming of surfing atop trash cans and other oddities was an interesting journey, but I was ready for a vibe change. And a glass of wine. So on the sixth day, I decide the blue lotus wine is ready. Internet searches tell me two weeks produce the most potent effects, but I figure one week is the correct level for a Thursday evening of horoscope writing (and my personal emotional state).

I’ve done enough plant medicine to know that set and setting are major components. So as I run the seductive purple liquid through a strainer, I regret not making plans to take the concoction to a party, or at least share it with a close friend.

But Mercury is retrograding hard, I’m riding a grief wave, and deadlines are looming, so the best I can do is spend a night in with a blank Google doc and my feelings.

Taking cues from the ancient Egyptians, I say a meditative prayer to the blue flower, asking it to lift my spirits enough to let me write what I need to, or at least just enjoy my own company, achy heart and all.

The wine tastes extra floral, but I don’t mind it. With a few summer fruits added in, it’d make a good sangria.

Half a glass and 20 minutes later, I’m crying over nothing and everything. The ancient Egyptians used this concoction for sex rituals, and crying is its own kind of release, so maybe it’s working. Then for a reason I can’t pinpoint, my tears just as quickly turn to belly laughs.

Maybe it’s the moon, the wine or the lotus, but suddenly I’m buzzy with phrases and so many nonlinear thoughts that I write rough drafts for two separate articles almost simultaneously. Something like euphoria, or just momentary relief from heartache, moves me to dance. Alone in my home studio, I’m filled with love for myself and the plants that are there for us through all of life’s chapters.

Amy Copperman is a writer and artist based in Oakland, Calif. Find her on Instagram. 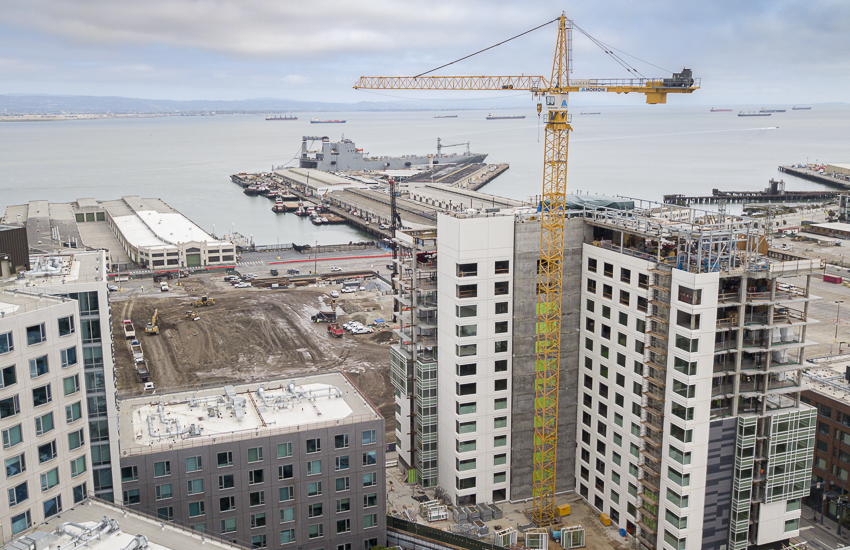 What does one job posting inform us about San Francisco? Perhaps nothing. Perhaps the whole lot.