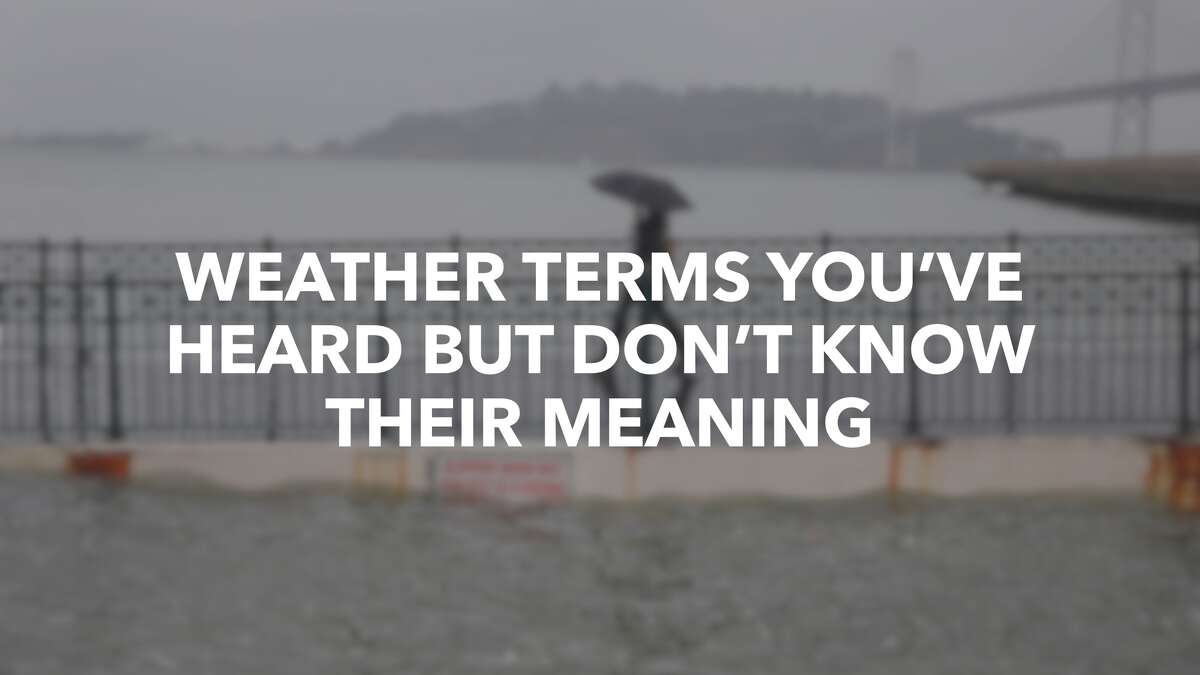 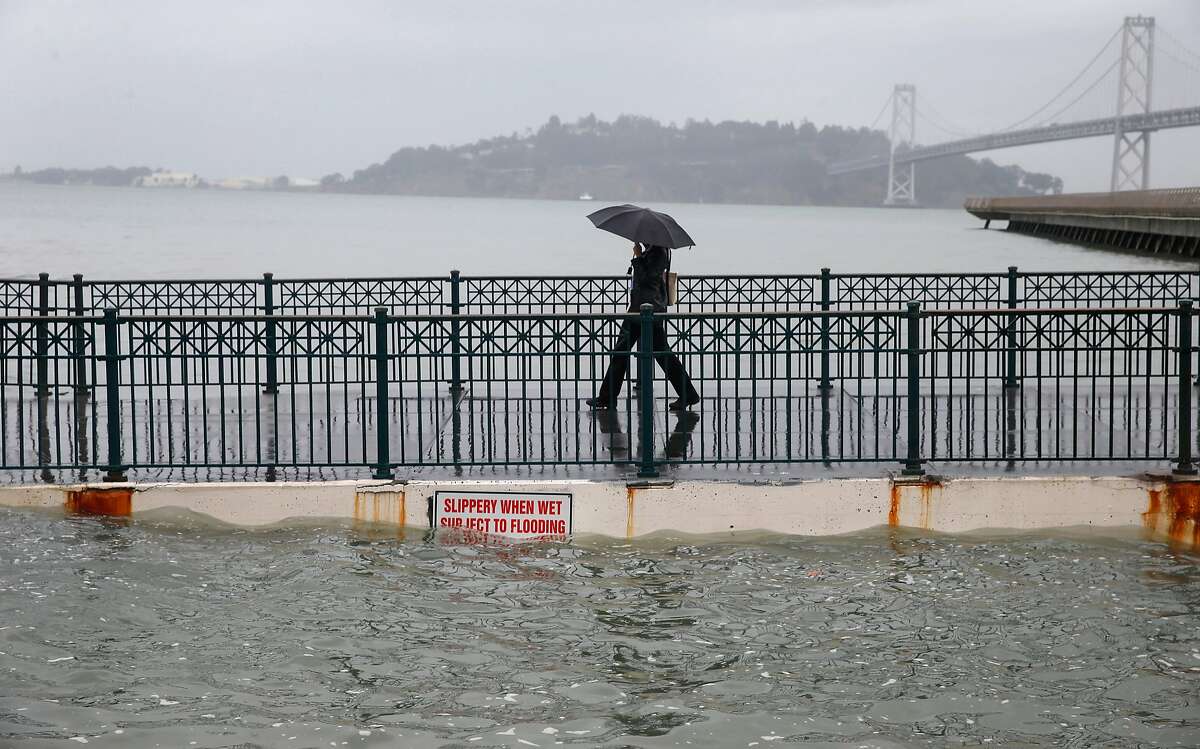 4of29Buy PhotoKing tides: This non-scientific term is commonly used to describe exceptionally high tides. “Tides are long-period waves that roll around the planet as the ocean is “pulled” back and forth by the gravitational pull of the moon and the sun as these bodies interact with the Earth in their monthly and yearly orbits,” according to NOAA. In the Bay Area, king tides occur in the winter. Paul Chinn/The ChronicleShow MoreShow Less 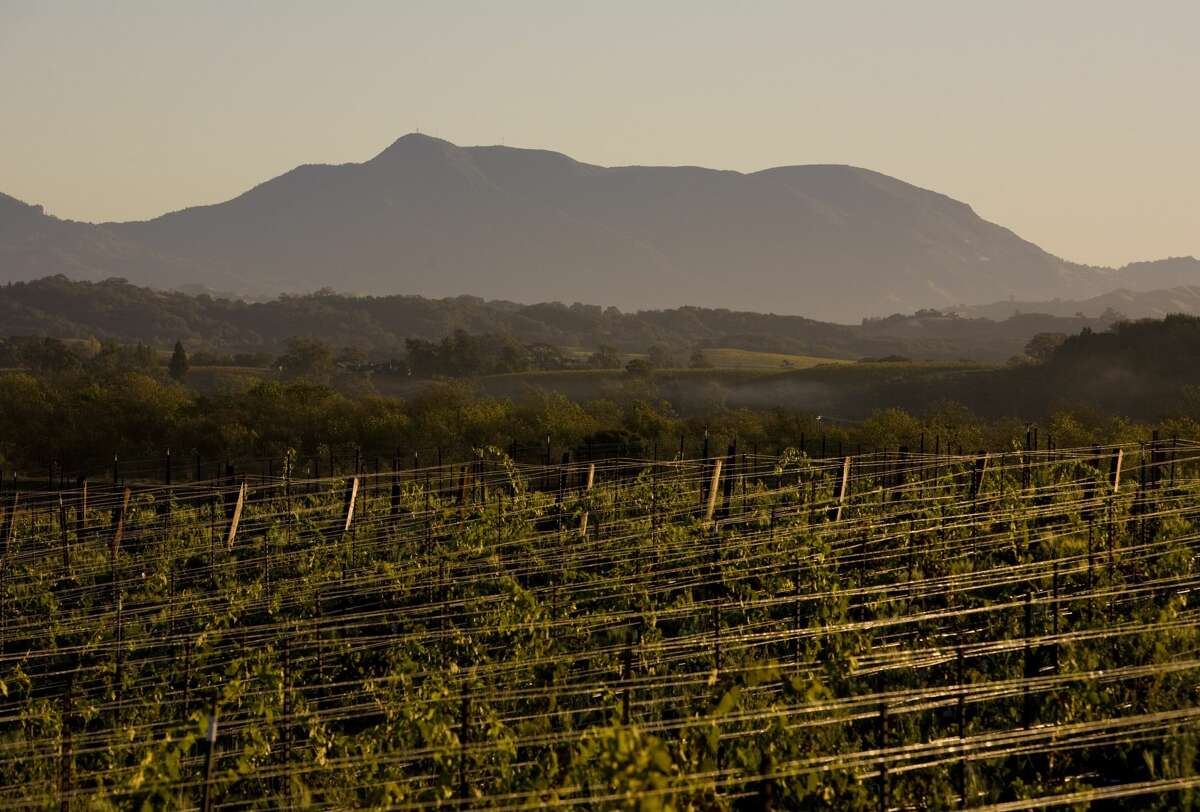 5of29Diablo winds: The offshore winds blowing hot air from the interior to the coast are commonly called the Diablo winds in the San Francisco Bay Area. (They’re known as the Santa Ana winds in Southern California.) They most often kick up in the spring and fall. These are the same winds that howled wildly on the night of Oct. 8, spreading flames and embers across Northern California’s Wine Country and amplifying fire conditions. On that night and in days after, gusts reached up to 70 miles per hour. George Rose/Getty ImagesShow MoreShow Less6of29 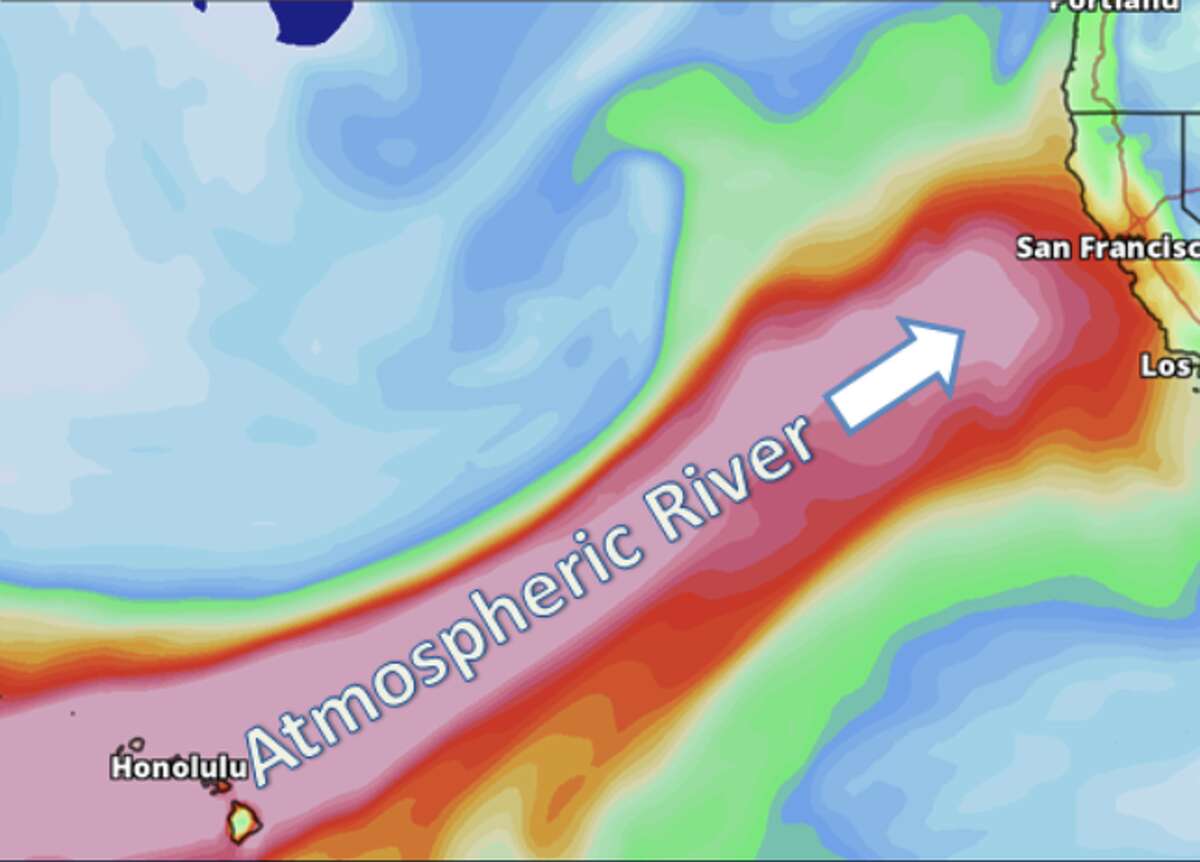 Atmospheric river: These supercharged storm systems are known for delivering massive amounts of snow and rainfall in a matter of days on the West Coast of the United States. The long plumes of water vapor in the atmosphere are like rivers in the sky—250 to 375 miles wide, on average. On the West Coast, they most often originate in the South Pacific, and, as they travel from the tropics across the ocean, they collect incredible amounts of moisture. The rain is funneled into cities like San Francisco, Sacramento, Portland, and Seattle, where the runoff systems are often unequipped to deal with the days-long deluge. When an atmospheric river hits land, water vapor rises and cools, unleashing precipitation. The amount that falls is dependent upon the strength of the storm and its moisture content. An atmospheric river carrying moisture from as far away as Hawaii to the West Coast is what’s known as a “pineapple express.” 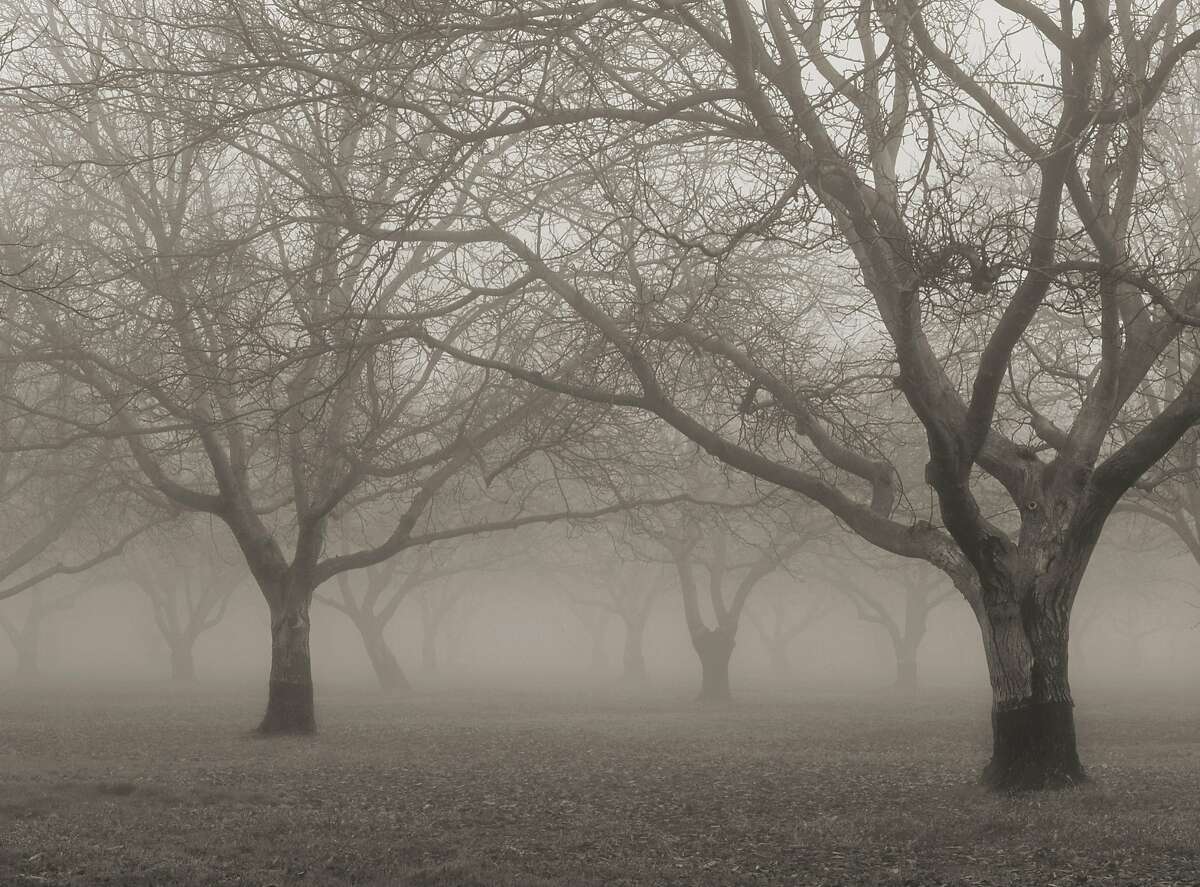 8of29Tule fog: This thick ground fog settles in the San Joaquin Valley and the Sacramento Valley when the skies are clear and the temperatures are cool. The season runs late fall through early spring and usually starts after the first rain. Sometimes winds sweep the fog into the San Francisco Bay Area. This differs from our summer fog pattern, which typically moves inland from the Pacific. Anthony DunnShow MoreShow Less9of29 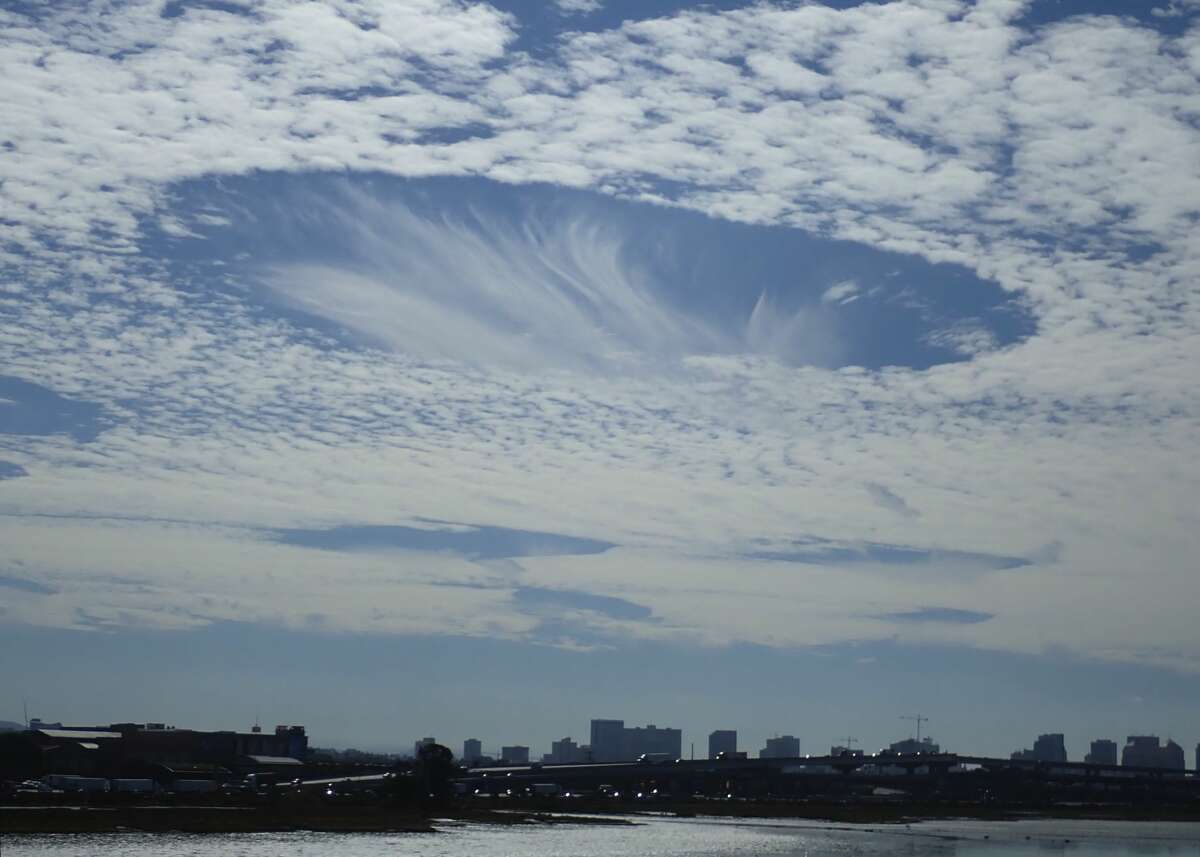 Fallstreak cloud: These stunning formations are also sometimes called hole punch clouds because it literally looks as if something punched the sky with cloud puffs dissipating from a large elliptical gap. The National Weather Service explains fallstreaks occur when the water temperature in a cloud is below freezing, but the tiny water droplets forming the cloud have yet to freeze.

“These ‘supercooled’ water droplets need a ‘reason’ to freeze, which usually comes in the form of ice crystals,” NWS explains. “Planes passing through the cloud layer can bring these ice crystals. Once the ice crystals are introduced, the water droplet quickly freeze, grow and start to fall. A hole is left behind, which will start to expand outward as neighboring droplets start to freeze.” See photos from Sept. 14, 2018, when fallstreak clouds were spotted all over the Bay Area.

11of29Sun dogs: When the sun’s rays pass through ice crystals in the atmosphere, mini-suns can appear at its sides, as in this photo from Fairbanks Alaska, Legend has it that the ancient Greeks figured Zeus was out walking his pooches. Actually, Apollo was the sun god, but who wants to ruin a good story?John Wagner/Fairbanks Daily News-MinerShow MoreShow Less12of29 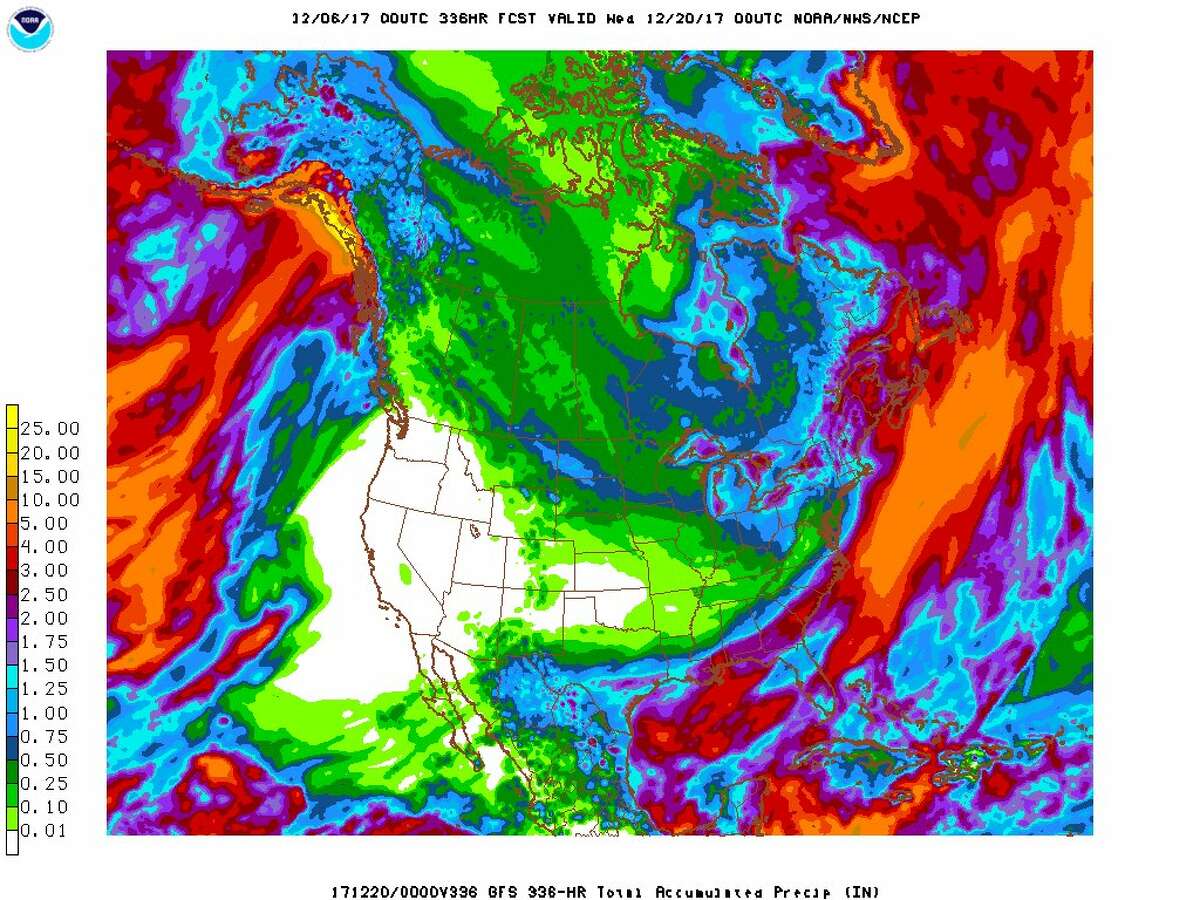 13of29High-pressure ridge: Elongated ridges of high pressure can move into California at any time of the year, and they’re commonly associated with dry conditions. Air in a high-pressure area compresses and warms as it descends. The warming prevents the formation of clouds, meaning the sky is normally sunny in high-pressure areas. What’s more, when a high-pressure ridge is off the West Coast, it blocks incoming storms from the Pacific Ocean and weakens those that successfully pass through.National Weather Service Show MoreShow Less 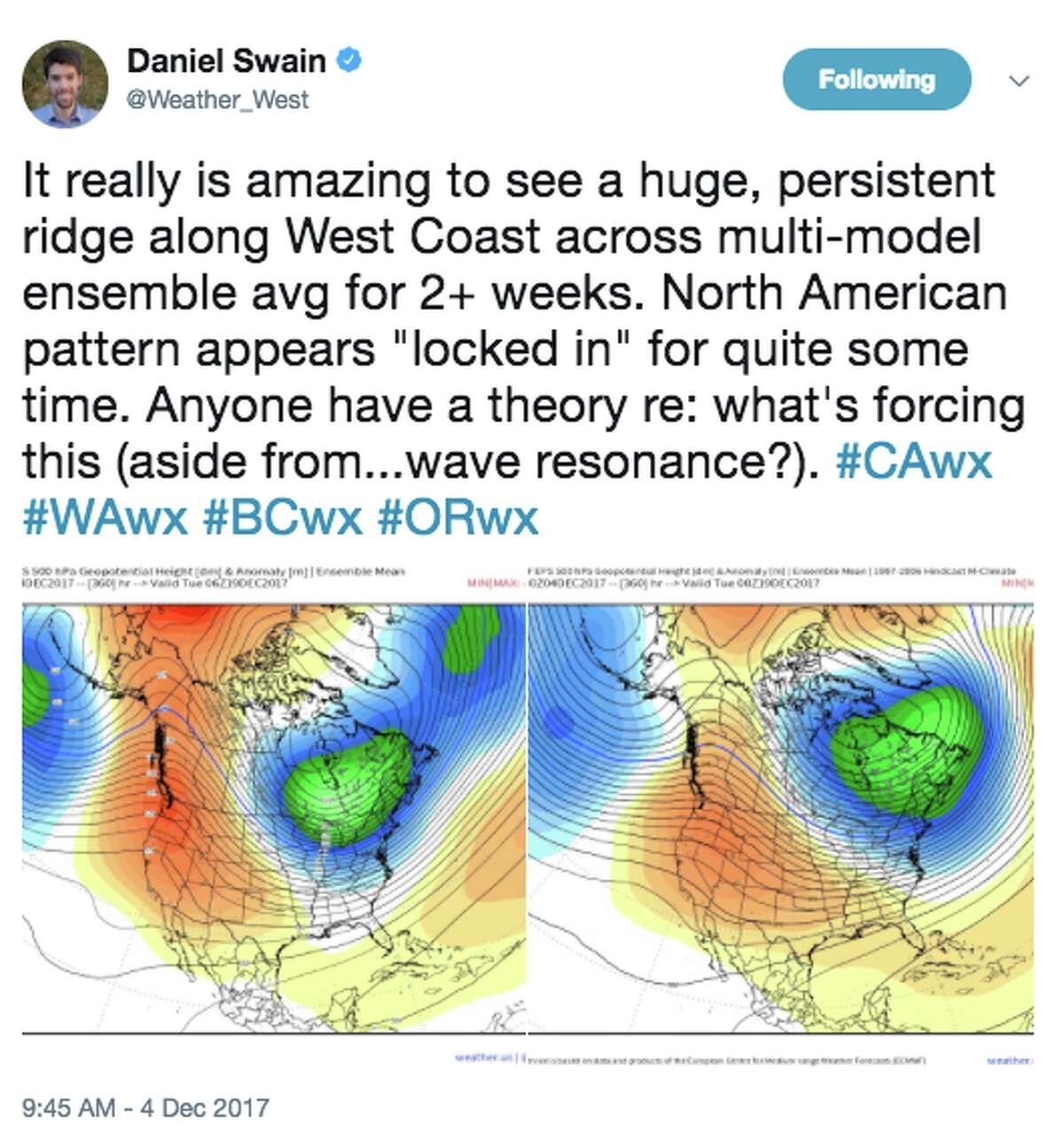 Ridiculously resilient ridge: Daniel Swain, a climate scientist at UCLA, coined the term “ridiculously resilient ridge,” sometimes shortened to “RRR,” to describe the phenomenon when a ridge of high-pressure persists for an extended period of time over the father northeastern Pacific Ocean. The ridge blocks storms from reaching the West Coast, resulting in abnormally warm and dry conditions in California. 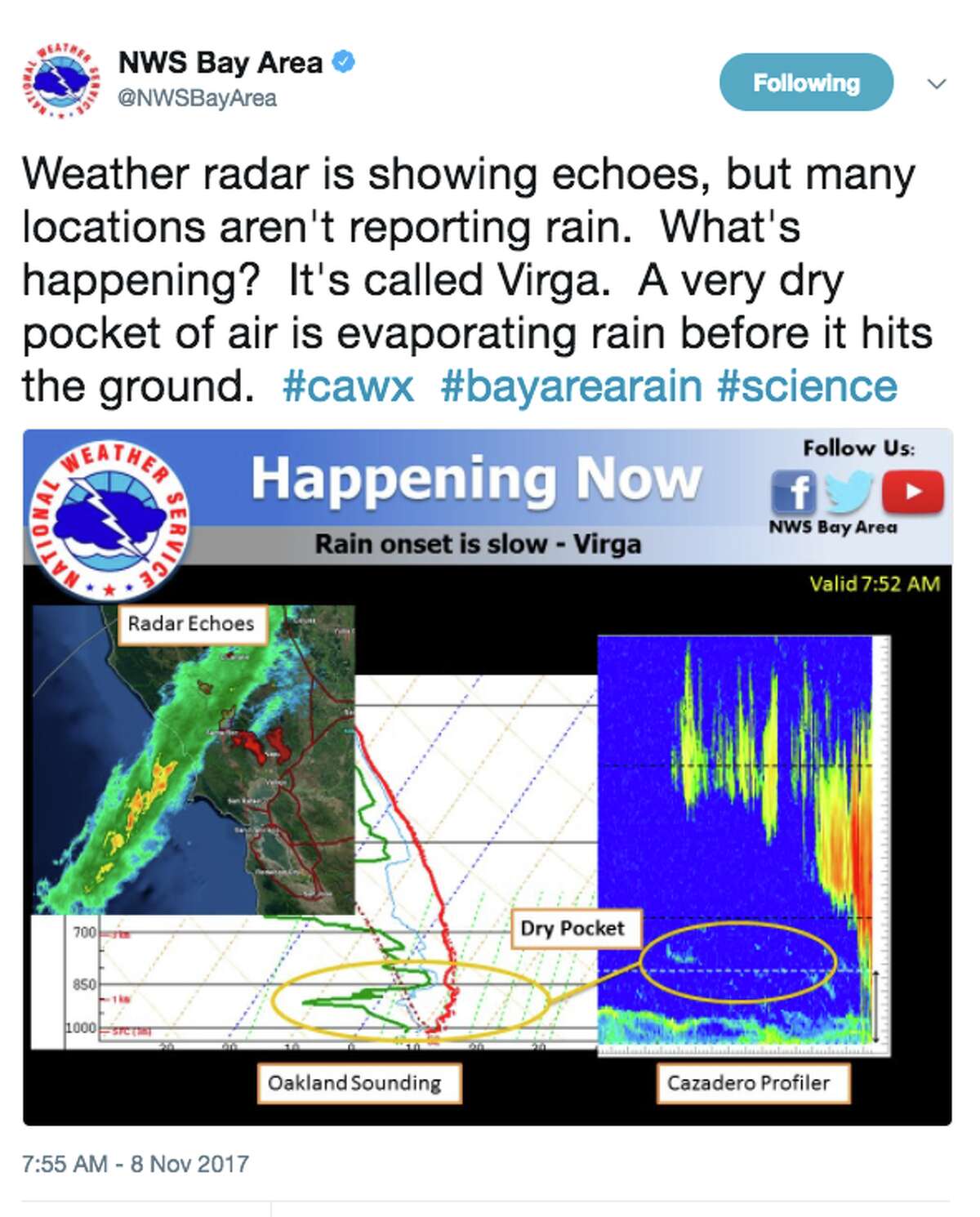 Virga: This weather phenomenon occurs when the clouds are thick and dark but don’t drop rain to the ground. It’s because a pocket of dry air in the upper atmosphere evaporates the water droplets before they can hit the ground. 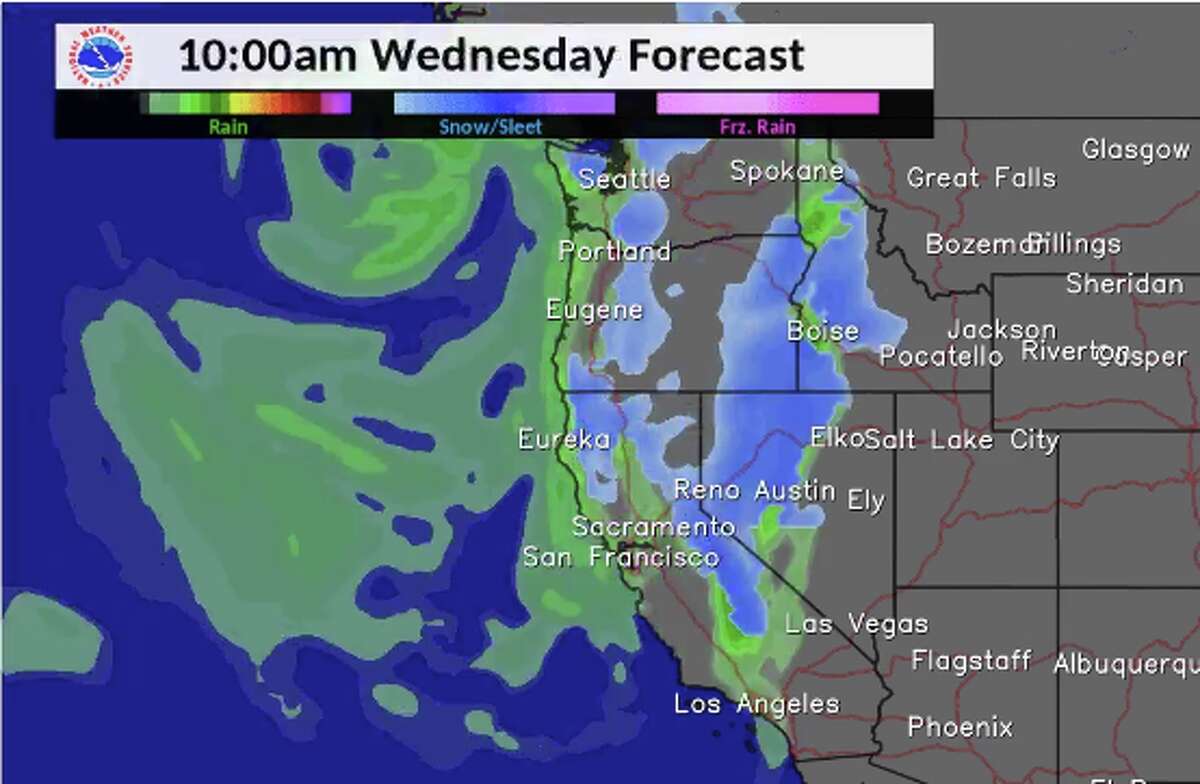 Open storm door: This metaphorical term refers to a weather pattern when low-pressure is overhead, allowing for storms from the Pacific to move into California. 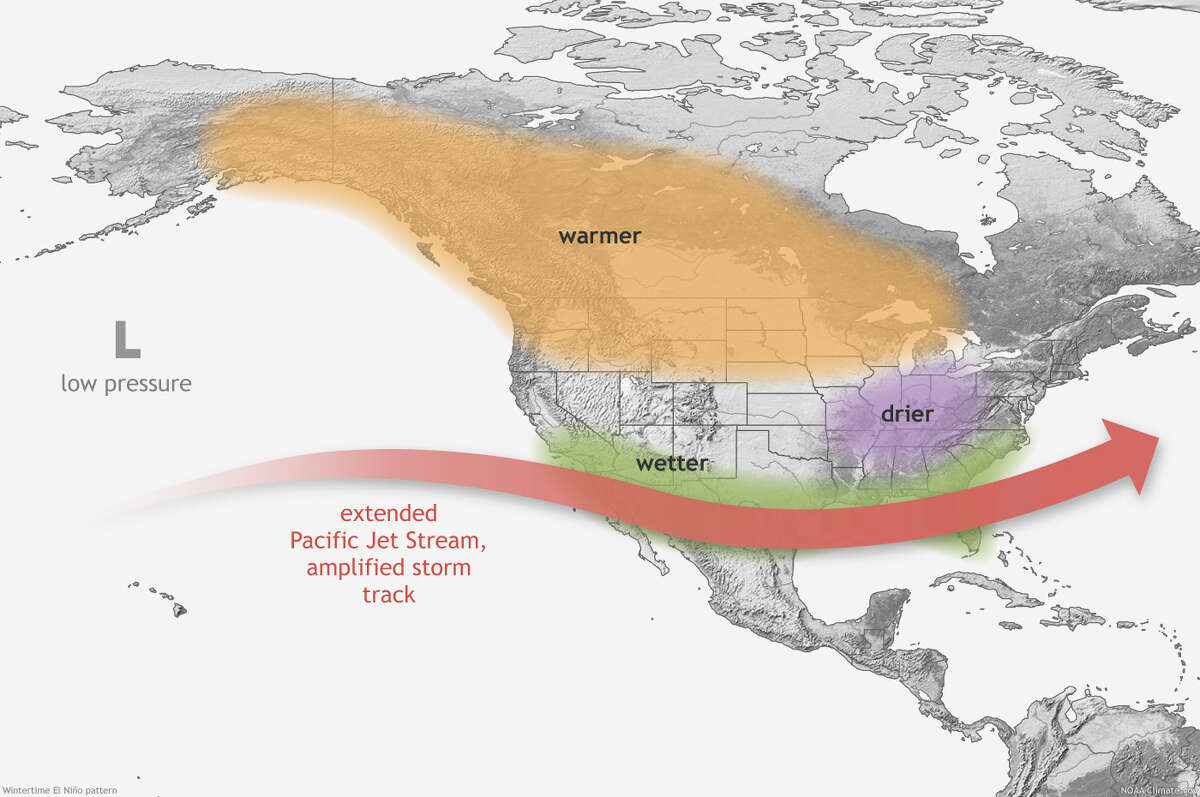 El Niño: The inverse of La Niña, El Niño, is a warming of the equatorial waters in the center and eastern Pacific Ocean. This warm zone pumps heat and moisture into the atmosphere, releasing energy that impacts the high-altitude jet streams circling the planet. While El Niño is associated with above-normal precipitation in California, a number of different outcomes are possible. 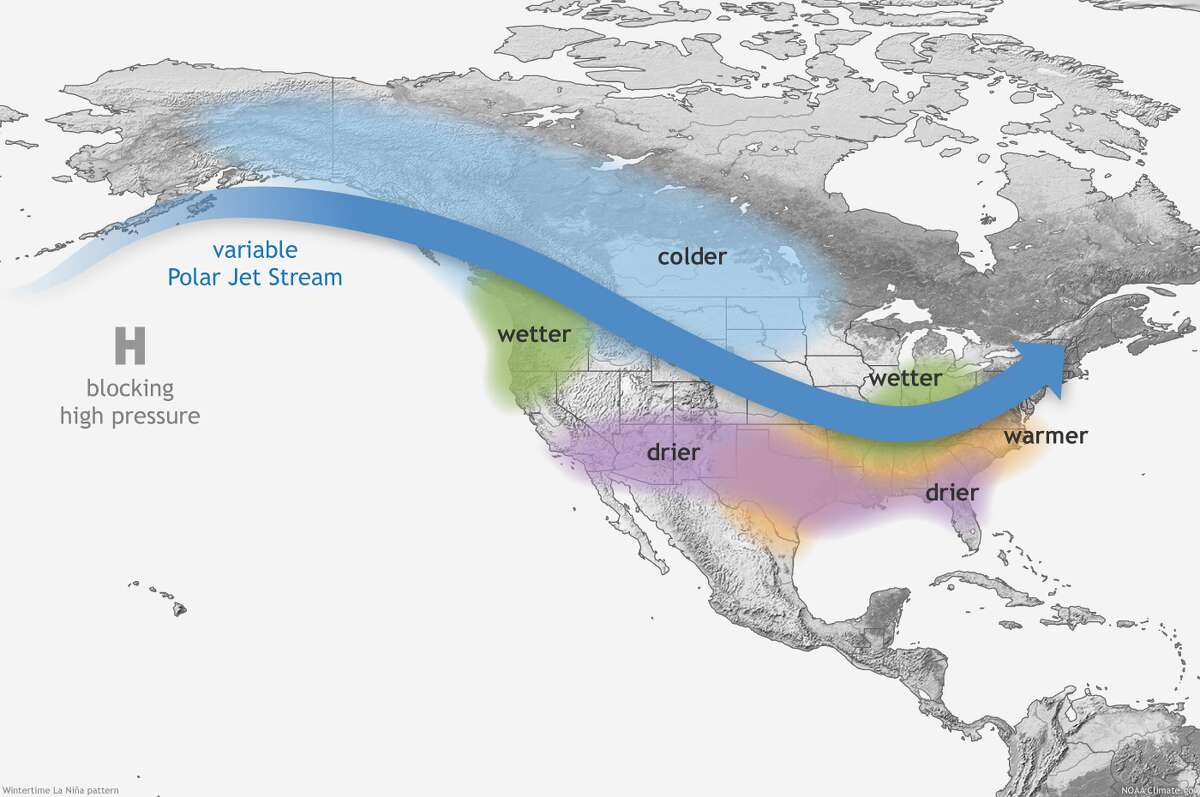 La Niña: The cousin of better-known El Niño is a cooling of equatorial waters in the eastern and central Pacific Ocean and can impact atmospheric conditions worldwide. In California, the La Niña weather pattern is known for bringing above-average precipitation to the far northern reaches of the state near the Oregon border and delivering below-average precipitation to the central part of Northern California and even drier conditions into Southern California. Historical data, however, reveals that a number of outcomes are possible. 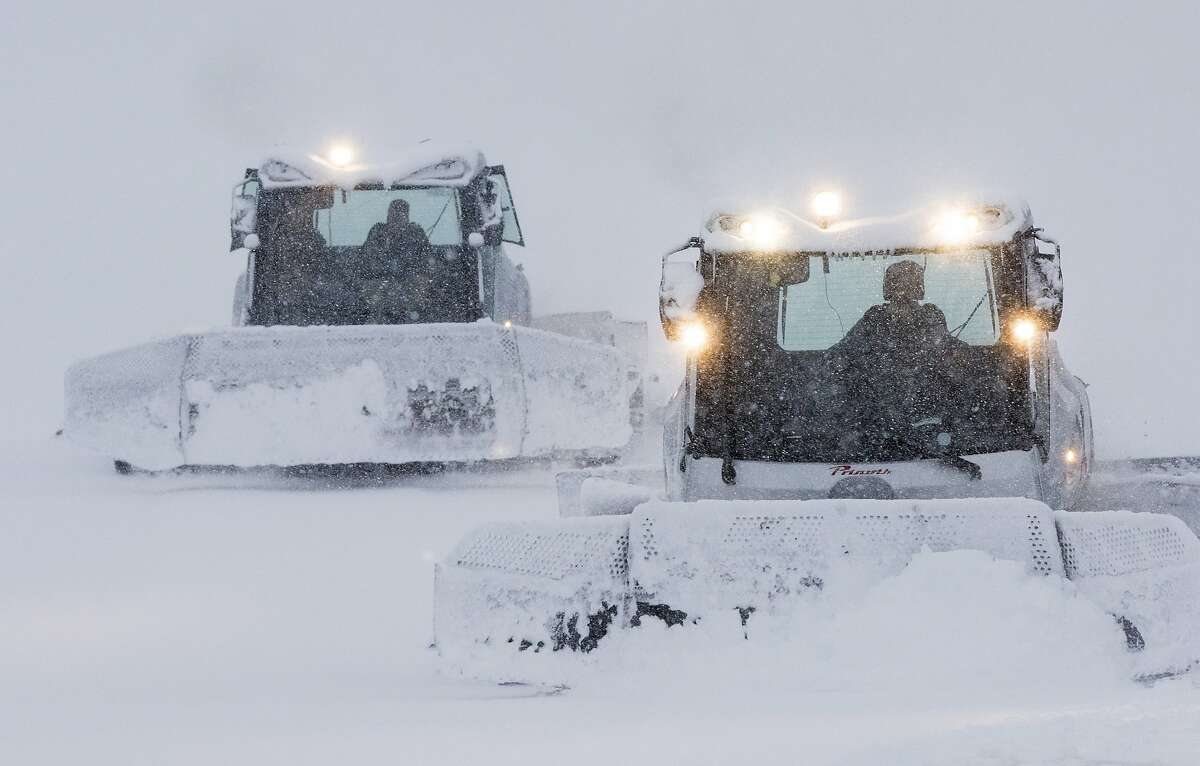 22of29Inside slider: This type of storm drops directly down from the north and moves north to south as opposed to the more common Pacific storms that move from the west to east and come off the Pacific Ocean.

A storm known as an “inside slider” is bringing icy temperatures and a light dusting of snow to the northern Sierra Nevada Monday.

This type of storm drops directly down from the north and moves north to south as opposed to the more common Pacific storms that move from the west to east and come off the Pacific Ocean.

“It’s a completely different trajectory and usually we have different characteristics with it,” explains Dawn Johnson, a meteorologist with the National Weather Service’s Reno office. “As a general rule, inside sliders tend to bring in colder air masses. Because these come from an inland trajectory, they don’t have that Pacific moisture feed going into them and they tend to be drier.”Northstar California ResortShow MoreShow Less 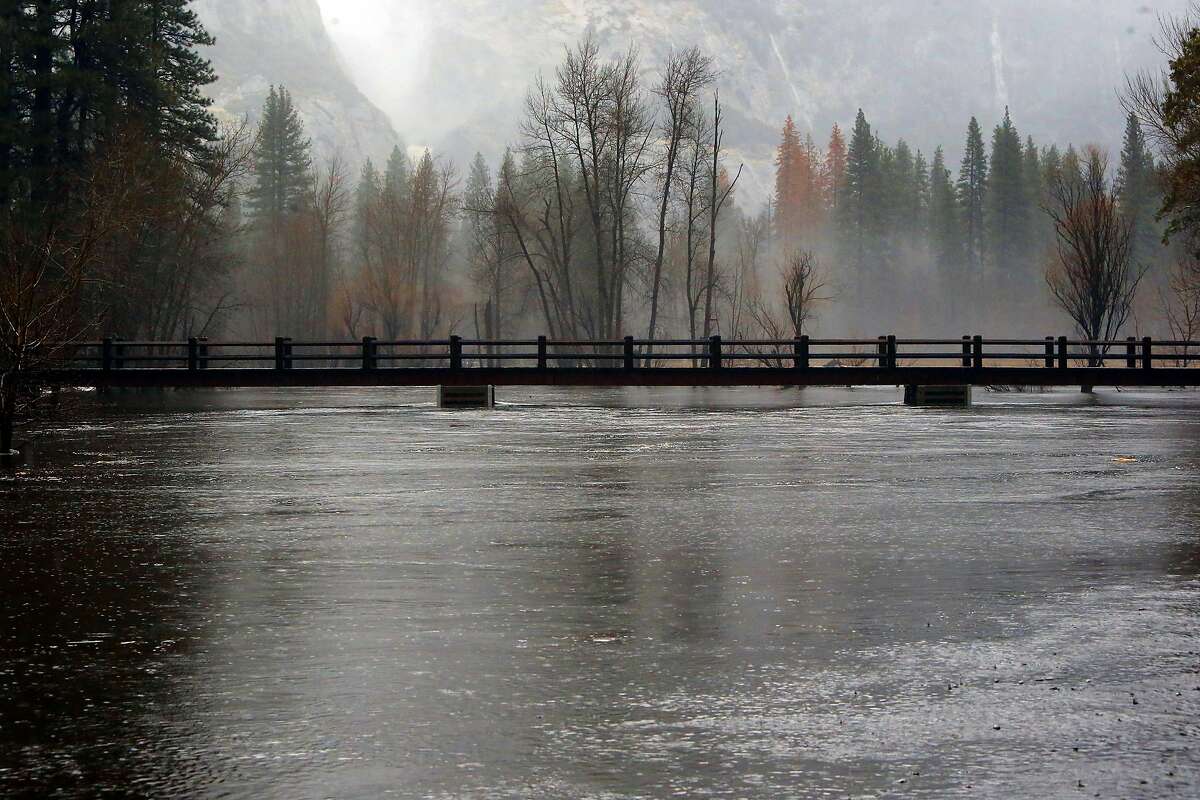 23of29Buy PhotoFlood stage: The level at which a river rises enough to cause sufficient inundation of areas that are not normally covered by water, causing an inconvenience or a threat to life and/or property. When the water rises to this level, it is considered a flood event. In this photo, the Merced River rises to just below Swinging Bridge in Yosemite National Park, which was under a flash flood watch, on Sunday Jan. 8, 2017.Michael Macor/The ChronicleShow MoreShow Less24of29Buy Photo 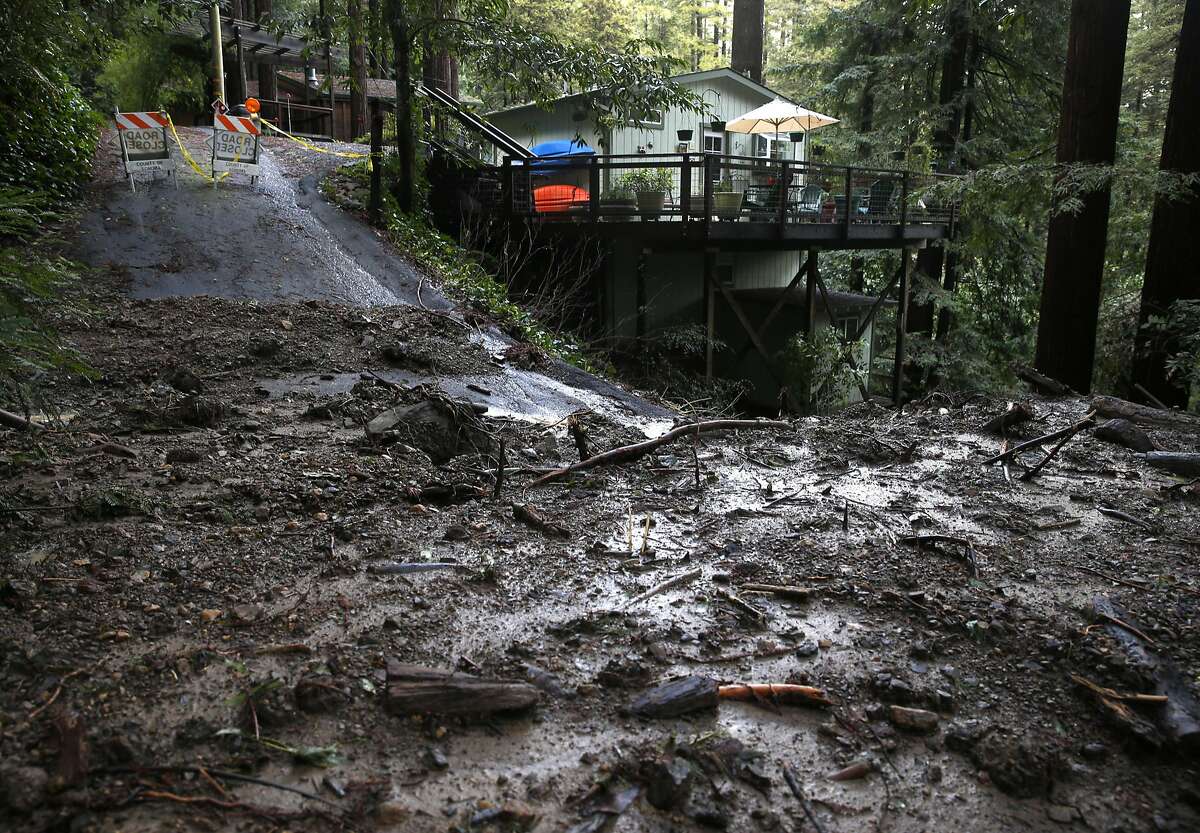 25of29Buy PhotoDebris flow: A geological phenomenon when water rushes down a mountainside carrying soil and fragmented rock. These often occur in areas that were recently burned by wildfire, as the ground is loose. In this photo, a mud and debris flow led to the closure of Santa Rosa Avenue in Guerneville, Calif. on Wednesday, Jan. 11, 2017. Paul Chinn/The ChronicleShow MoreShow Less 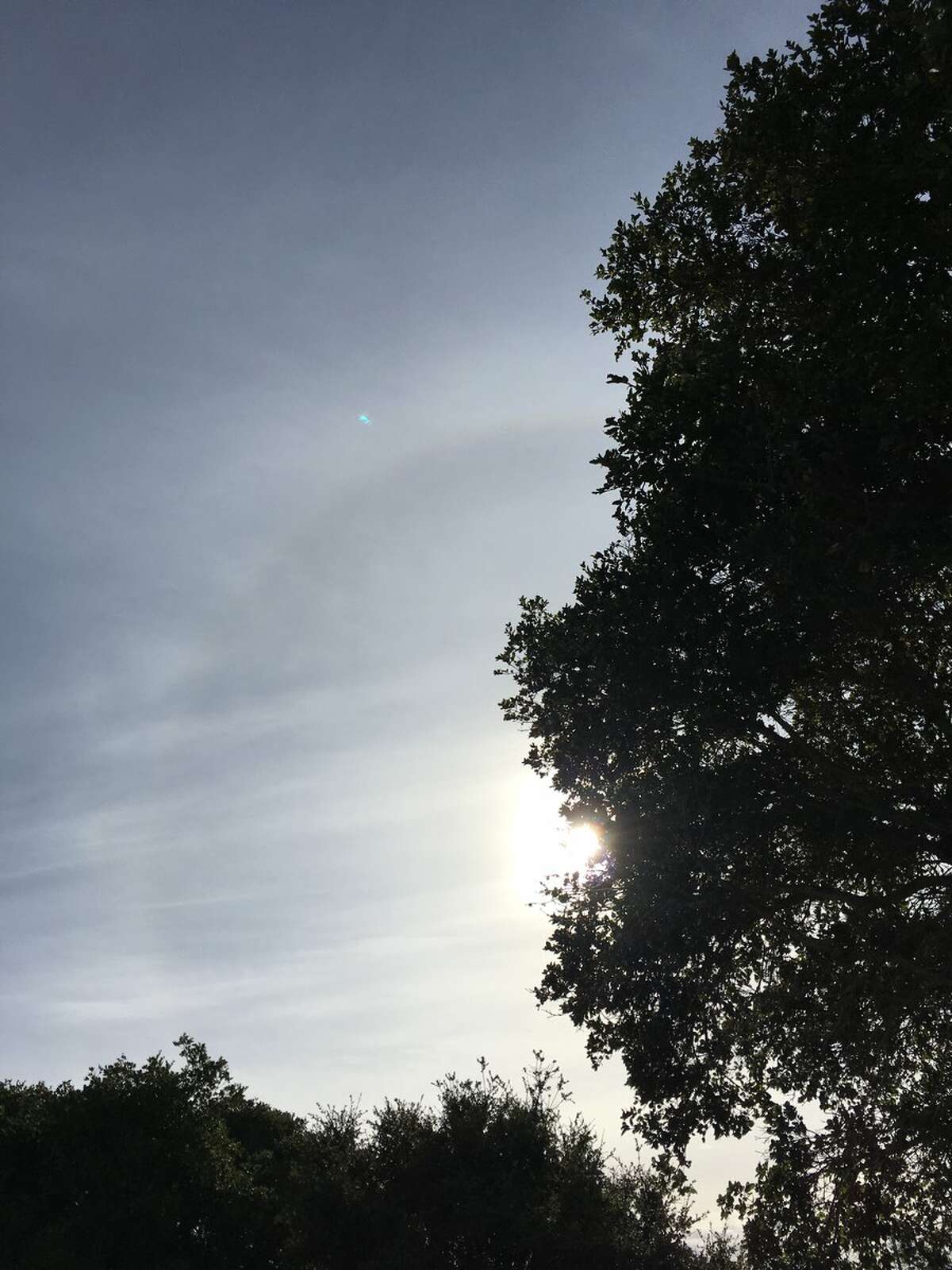 22 degree halo: These rings of light occur around the sun or moon when light is refracted by ice crystals associated with high-level clouds known as cirrostratus. 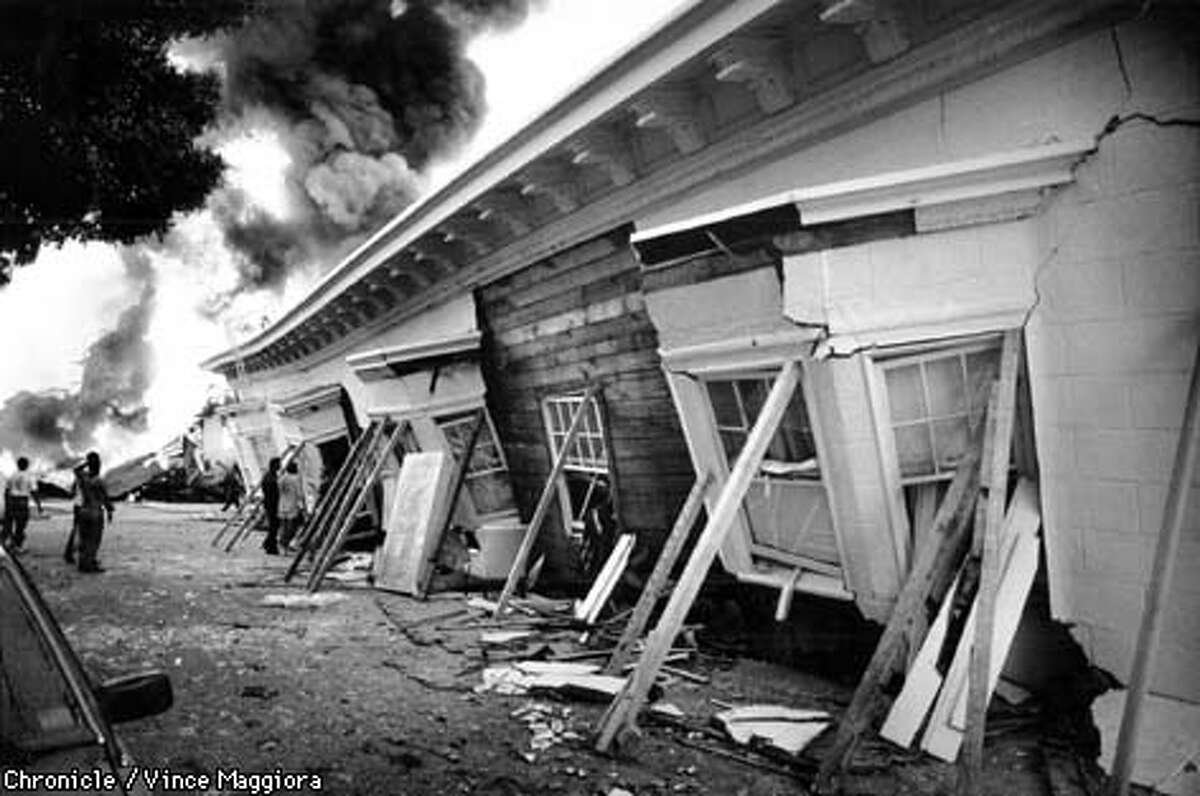 28of29Earthquake weather: An infrequent hot and muggy San Francisco day is called earthquake weather after the meteorological conditions on April 18, 1906 and October 17, 1989 (pictured). It’s meteor-illogical to assume the next big quake will be on this kind of day, there is just no evidence to support the conditions causing quakes, but it’s a good reminder to check the bottled water and canned food supply. Show MoreShow Less29of29

Bay Area residents woke to cool, crisp, clear weather typical of fall Wednesday morning, and on Thursday temperatures are forecast to dip lower, according to the National Weather Service. But the chill won’t last long, as Friday marks the start of a warming trend that will continue through the weekend.

Temperatures Wednesday morning were in the 40s in inland areas and 50s along the bay and coast. With clear, sunny skies in the forecast all day, the mercury is expected to rise into the 70s in most areas by lunch time.

A dry system is expected to sweep the Bay Area on Thursday, delivering a blast of chilly air and pushing temperatures back down. The fog will likely return and the NWS suspects coastal areas will see drizzly conditions Thursday morning. Measurable rain is unlikely.

“Main impact for Thursday will be a few degrees of cooling with increasing onshore winds Thursday afternoon and evening, especially along the coast and in the coastal hills that will make things feel blustery as the main upper trough axis and associated cold pool aloft passes overhead,” according to the NWS report.

On Friday as high pressure builds and blocks activity off the Pacific Ocean, temperatures will rebound and are forecast to push into the mid- to high-70s region wide. The warm weather is expected to persist through the weekend.

“For the time being our forecast trends look good with Sunday looking to be the hottest day of the weekend with lots of mid and upper 80s,” the NWS reports.

Amy Graff is a digital editor for SFGATE. Email her weather photos and story tips at agraff@sfgate.com.

Amy Graff is the news editor for SFGATE. She’s a Bay Area native and got her start in news at the Daily Californian newspaper at UC Berkeley where she majored in English literature. She has been with SFGATE for 12 years. You can email her at agraff@sfgate.com. 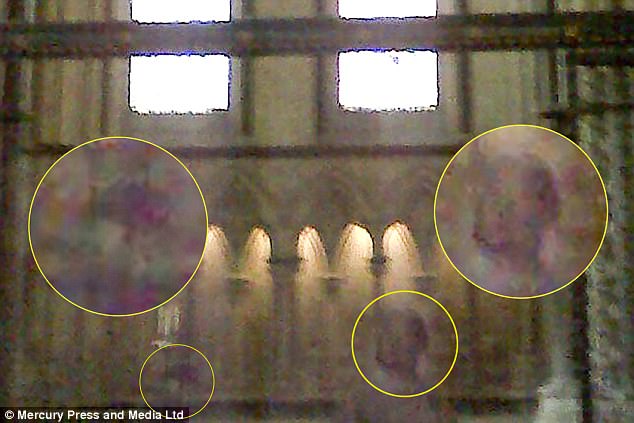 Tiger International is elevating a brand new $3.75 billion enterprise fund, one 12 months after closing its final 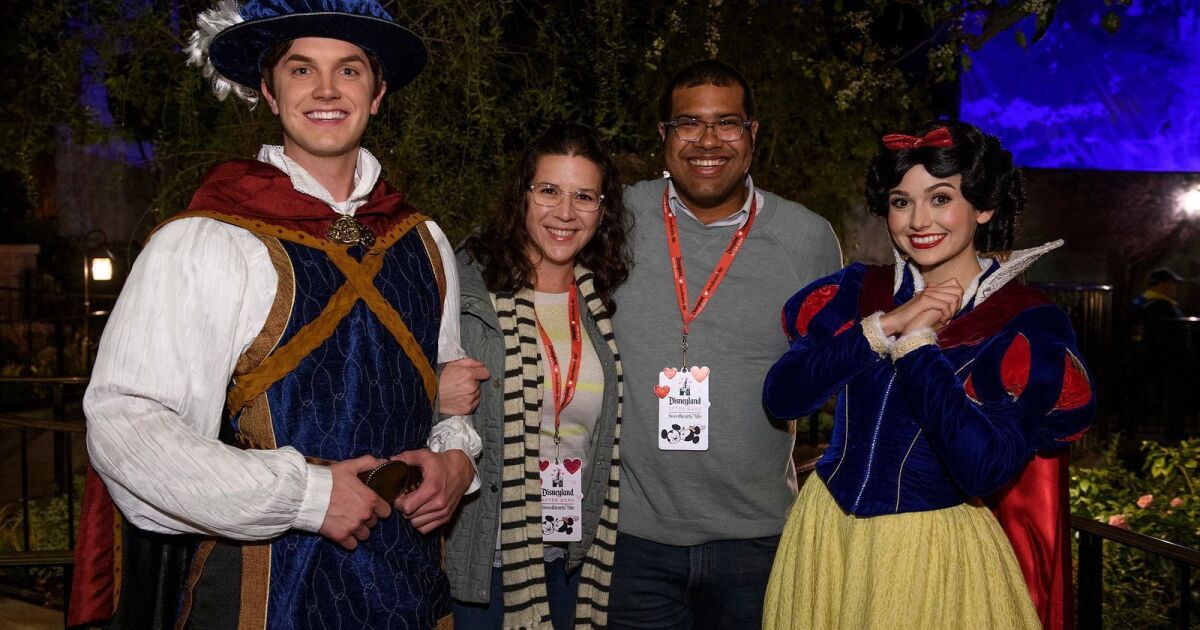 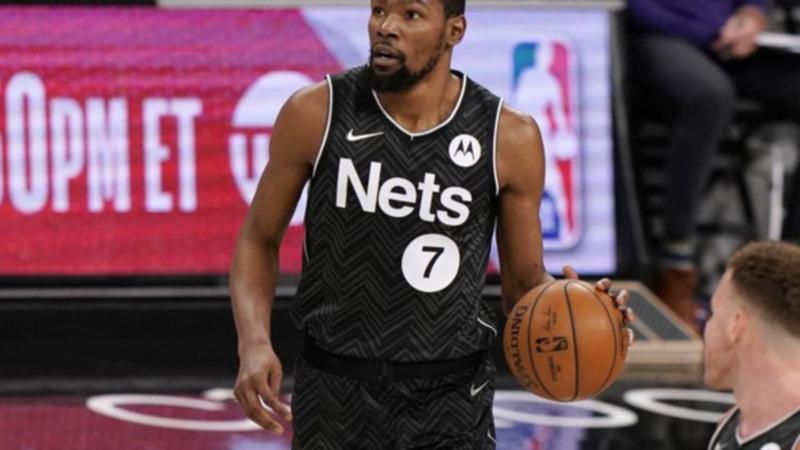